Ontario will become AMD’s first APU circuit when it launches in Q4 to be used in netbooks and ultraportable devices. A slide revealing details on the power consumption of Ontario but also information on big brother Zacate have surfaced together with pictures of the circuit they are both based on.

AMD Ontario is the entry level chip to go up against Intel Atom on the netbook market and perhaps even the Intel CULV line on the ultraportable market. According to the numbers presented by AMD at IFA 2010 in Berlin the first Ontario APU will sport power consumption of at most 9 watt. It will most likely be a dual-core model, but single-core versions are slated to appear too, being even more energy efficient.

There was no information on the clock frequency or performance, but Intel’s first dual-core Atom N550 CPU clocks in at 1.5 GHz and with integrated graphics consumes up to 8.5 watt, clearly within reach for Ontario. Performance will be on par with current mid-range models says AMD, which is substantially faster than anything Atom.

AMD Zacate also builds on the Bobcat architecture, but is the equivalent to the Intel Atom D5xx series, which means a bit more power suited for nettops, and more powerful notebooks. Zacate will consume at most 18 and found in everything from all-in-one PCs and integrated on mini-ITX motherboards. The latter should be an exciting platform for multimedia computers and HTPCs. The only thing that will separate Zacate from Ontario is clock frequencies and voltages, which means they are otherwise identical. This probably applies to the GPU as well as the CPU portion. 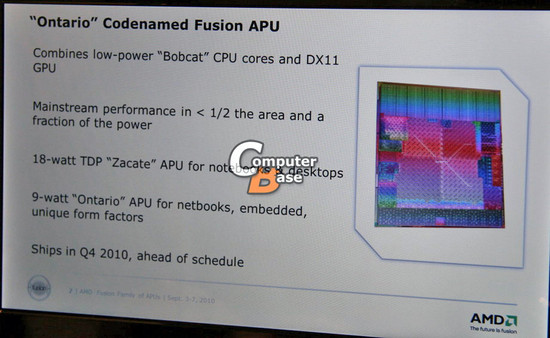 Both Ontario and Zacate will start shipping to OEMs in Q4 2010 and the first retail products are expected to appear early next year. Up until then we hope to learn more about the architecture and performance of AMD’s integrated graphics circuits.