AMD E-450 will be the spiritual successor to E-350 that launched in January 2011. The new Zacate model gets both higher CPU and GPU clock frequencies, but the nominal frequencies are only slightly upgraded since the big boost comes from Turbo Core. The two Bobcat cores of E-450 operate 1.65 GHz, which is just slightly higher than 1.6 GHz of E-350, while the 80 Radeon cores of the GPU gets a boost to 508 MHz from 492 MHz.

AMD Turbo Core will NOT affect the frequency of the CPU cores but the implementation of AMD’s new Zacate flagship is only for the GPU. In the case AMD E-450, Turbo Core can push the GPU frequency from 508 MHz up to 600 MHz, which according to AMD will result in a performance boost of around 22% over AMD E-350. 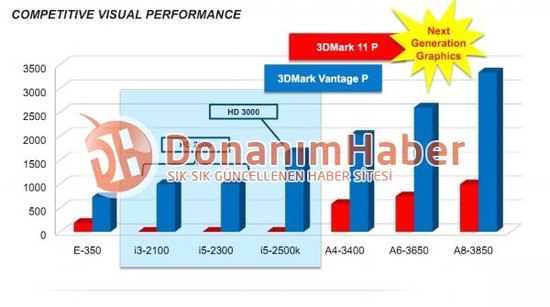 AMD has beside a quicker GPU also baked in official support for DDR3-1333 memory, which will push performance another 10%. Last but not least the new trio of Fusion processors also support HDMI 1.4a which adds full support stereoscopic 3D.

AMD C-60 only one with CPU Turbo Core

Also these models have support for DDR3-1333, HDMI 1.4a and DisplayPort++. Notebooks and other products with the new processors will be on the market soon.