Asus has launched a new model of Nvidia’s popular performance card GeForce GTX 670 where the memory has been doubled from the standard models. Asus GeForce GTX 670 DirectCU II comes with 4 GB memory and a tailored circuit board with a big power supply.

Asus is used to tailoring circuit boards for its flagship products and this is the case with Asus GeForce GTX 670 DirectCU II too. The power supply consist of 6+2 phases and uses Digi+ VRM circuits and super alloy coils, which according to the manufacturer will not whine during load, thus minimizing ”coil whine.”

The graphics card is clocked at standard frequencies on both GPU, 918 MHz, GPU Boost, 980 MHz.GPU Boost, and memory, 6 000 MHz. The big difference from the standard models of GeForce GTX 670 is the bigger memory buffer. Asus has increased the buffer from 2 GB GDDR5 memory to 4 GB, which will make it more longlived and should be capable of extreme resolution enabled by Nvidia Surround. 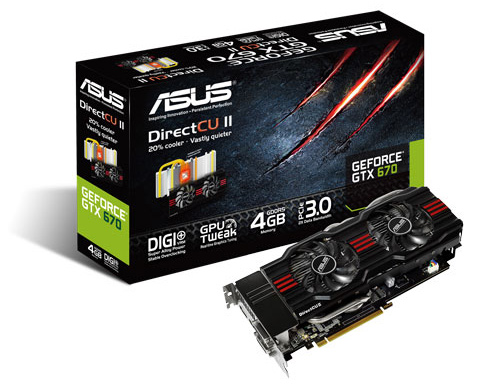 Asus GeForce GTX 670 DirectCU II has multiple video outputs, including two DVI, one HDMI and one DisplayPort ouput. The graphics card will cost around 400 euro and will be in stores any day now.