Google is moving along with Chrome quickly and with version 10 we expect a big performance improvement. In the new beta of Chrome 10 that has rolled out we see a boost of 66% with JavaScript, while CPU load is lowered with as much as 80% at video playback.

Google has started implementing the first good support for GPU accelerated video playback, which should reduce the load on the CPU radically. System with compatible GPUs will get up to 80% lower CPU usage when playing video in fullscreen, which of course results in better battery times with notebooks. 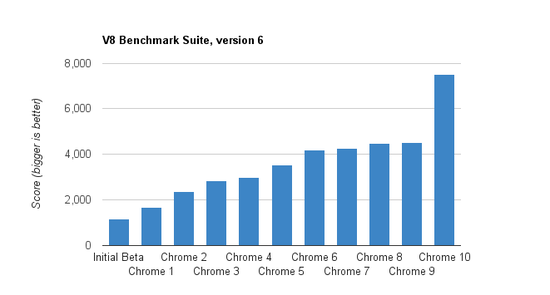 Chrome’s JavaScript engine V8 has been heavily optimized and shows a groundbreaking performance improvement over earlier versions. Other news include a functions for synchronizing stored passwords across computers, and a new interface for the settings, which opens like a tab in the browser.

Google Chrome 10 beta can be found at the official website.