Corsair are still mainly known for being an active memory manufacturer with focus on enthusiasts and demanding users. The company has been broadening its lineup for some time, and now it has launched a bunch of new products for gamers. During a press event in London Corsair presented mice, keyboard and headset in the Vengeance family.

Corsair Vengeance is also known from the memory market where the company has been selling affordable memory modules with relatively nice specifications. Now the family has been expanded and this time it is in the form of peripjeral equipment – untested ground for Corsair.

Corsair has announced a couple of audio products in the past and it has now expanded with three new headsets in the Vengeance series. The focus is as usual on enthusiasts and gamers where the entry model Vengeance 1100 use the uncommon ”behind the neck” design with a low weight for good comfort. The speaker elements measure 40mm and is accompanied by a microphone, remote on the wire and a USB adapter for analog audio inputs for all PCs. Corsair Vengance 1100 is expected to cost around 35€. 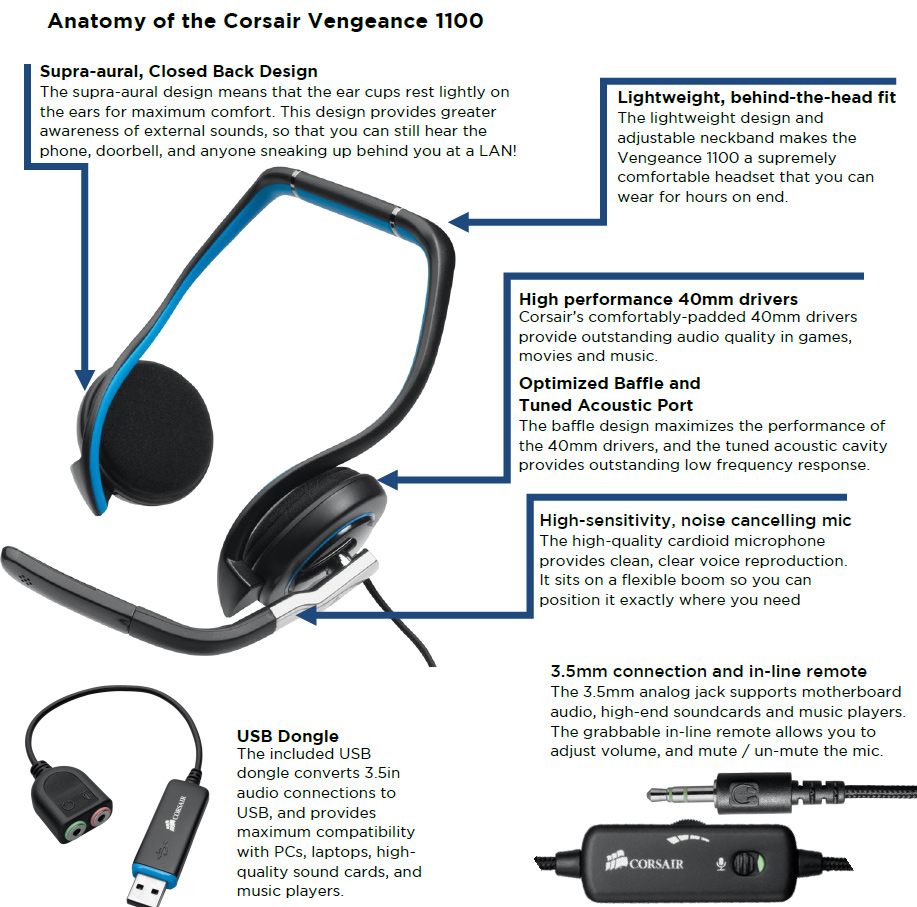 Corsair Vengeance 1300 and 1500 are the heavier artillery with 50mm elements, but cups and replaceable muffs in a full cover design. Both models look similar with dedicated volume control on the wire, while the 1300 model connects to an analog port for stereo sound, while Vengeance 1500 suppors up to 8-channel audio through its USB connection. Vengeance 1500 uses Dolby Headphone technology for simulating surround sound and is equiped with a one-way microphone with noise cancelling technology. The headphones are bundled with software for optimizing the sound of the headphones.

New for Corsair is mice and keyboards where it has entered the market with primarily two mechanical keyboards built on a durable design thanks to its aluminum structure.

Corsair says its 60 series with the keyboard K60 and mouse M60 will target gamers that prefer FPS games. Corsair Vengeance K60 comes with Cherry MX Red mechanical breakers and a tailored wrist support. Other functions include anti-ghosting technology, 20-key rollover and a quick response time at 1 milliseconds. The keyboard is expected to cost 90€.

The Corsair Vengeance M60 mouse uses a 5700 DPI laser sensor with adjustable resolution, aluminum unibody design, massive scroll, adjustable weight and PTFE feet. The mouse also has a ”sniper” button for immediately chaning between quick motions to a more high resolution mode for the delicate motions needed to make a long distant shot. The mouse will cost around 75€. Comparing the best Corsair gaming mice to other leading manufacturers, we’ll find the best options available for gamers

Corsair Vengeance K90 also use Cherry MX Red mechanical breakers with similar performance as the sibling K60. At the same time it offers individual backlighting for all keys with a cool blue diode with three intensities. We also find 18 dedicated macro keys that can be programmed through software and directly on the keyboard. In total there are 54 different macros through three different profiles. The settings are saved on the integrated flash memory and can thus be moved between computers. Vengeance K90 will cost 120€.

Corsair Vengeance M90 is a mouse with 15 programmable buttons placed for best possible ergonomics, but also help handling the various commands available in MMO games like World of Warcraft. The laser sensor is still 5700 DPI and the resolution can be changed depending on need. A bundled Windows software that allows users to change the macro settings that are also saved on the integrated flash memory. Corsair’s well endowed M90 mouse gets a price tag around 90€.

“We’re confident that our Vengeance gaming keyboards and mice will give you a competitive edge. Whether you prefer the immersion and intensity of MMO and RTS, or the adrenaline-fueled combat of FPS, our goal is to help you win.” Ruben Mookerjee, VP of retail products at Corsair commented

All Corsair gaming accesories will be on the market October 1st 2011.