The current technology for commercial flash based storage, NAND, has a new contender. The latest, with seemingly good chances of succeeding, is RRAM from Crossbar that according to the maker will be able to offer up to 20 times better performance.

There are many candidates aiming to overshadow NAND-flash as the default standard for flash storage. NAND is quickly evolving, but has presented some issues as a result from switching to new manufacturing processes aggressively in an attempt to improve storage capacity and reduce prices. Most contenders rarely leave the development stage or for that matter the drawing desk, or take years to get … anywhere.

Crossbar is company that has now presented an alternative that could turn things around. It has presented a technology called RRAM, or Resistive RAM, that could be a big step forward for flash storage if the promises come true.

RRAM cells builds on three layers; a non-metal electrode on the bottom, a metal elektrode on the top, and in between an amorphous (solid, but not crystal) silicon switch that can be controlled using voltage between the two electrodes. These cells are used to build circuits, and said circuits can then be stacked on top of each other to increase capacity without taking up more surface. 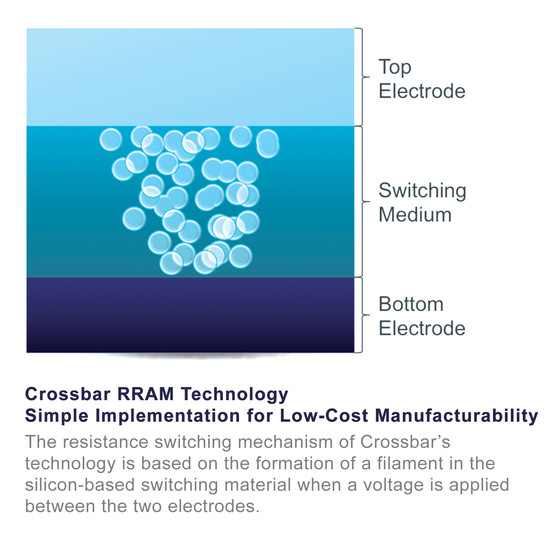 The company behind the technology promises very impressive properties. Partly the technology will not require any form of exotic manufacturing technology like many other experimental solutions do, but can be produced with regular CMOS processes. According to Crossbar the technology will offer higher storage density than NAND and can deliver several terabyte of storage in a single module. 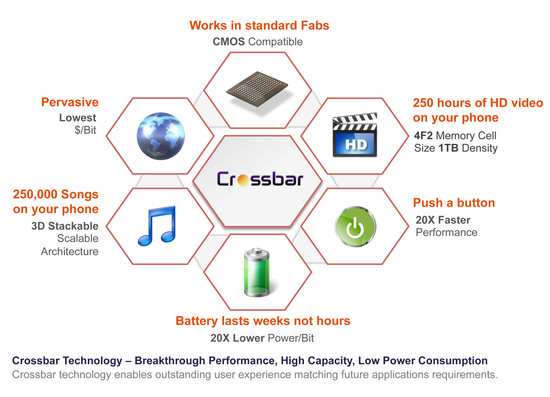 Up to 20 times better performance is promised, and according to representative Yatin Mundkur the technology can read 17 megabyte per second in and write 140 megabyte per second – per cell. The latency when random read will be 30 nanoseconds says Mundkur. RRAM will also consume less power and have a longer life expectancy than NAND.

Much praise, not so much staff

As with all of these new contenders there are obstacles to overcome. The company currently consists of 20 people, and to bring the technology to market Crossbar will have to bring in some serious investments and build up a big production volume. It is not unfeasible for the company to be acquired by a larger competitor before that happens.

If the technology can live up to its promises and it is as simply to produce as Crossbar claims it could be made at a large scale within 1-2 years. If that is the case or if the technology will vanish like so many other remains to be seen.