Graphics card maker Galaxy is working on a new model of NVIDIA’s powerful graphics card GeForce GTX 680. Galaxy GTX 680 4GB is the name of the card with twice as much memory and a base frequency at 1100 MHz, which should make it the world’s fastest single-GPU graphics card.

When we tested GeForce GTX 680 we concluded that NVIDIA had found a good balance between performance and specifications. At the same time one of the drawbacks of NVIDIA’s new flagship was the 2GB memory that risked becoming a bottleneck in big games. Galaxy has solved this by using sixteen separate 2 Gbit GDDR5 chips on a custom PCB. Alas, there is no word on the frequency of the chips, but we are assuming it is the same 6000 MHz as the reference version. 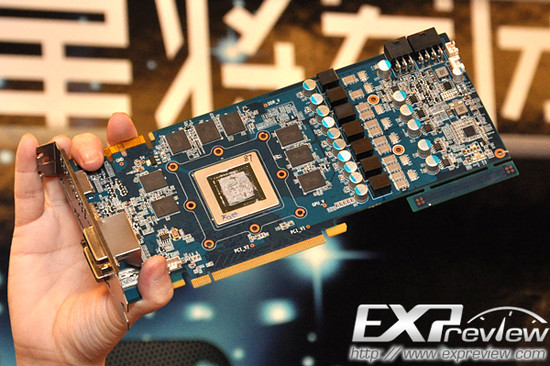 The card comes equipped with a more powerful power supply with 5+2 phases and field-effect transistor from International Rectifier. To make sure the card has enough juice Galaxy has upgraded the power connectors to one 6-pin and one 8-pin model.

The more powerful power supply has made it possible for Galaxy to boost the frequency of the GPU from 1006 MHz to 1100 MHz. How high GPU Boost will go is unclear.

Last but not least Galaxy has equipped the new GeForce GTX 680 card with a bigger cooler that uses copper heatpipes and dual 90mm fans to keep it cool. Exactly when Galaxy GTX 680 4GB arrives and at what price was not revealed, but it should also appear under the KFA2 brand in Europe.

At the same time Galaxy presented a new member of the Hall of Fame. Galaxy GTX 680 Hall of Fame will be made with a milky white PCB that besides a mighty analog 8+2+2 phase power supply with field-effect transistors and high-quality coils it will use in-house control logic. Its VRM controller chip GX31 will enable users to control voltages and energy consumption from software. 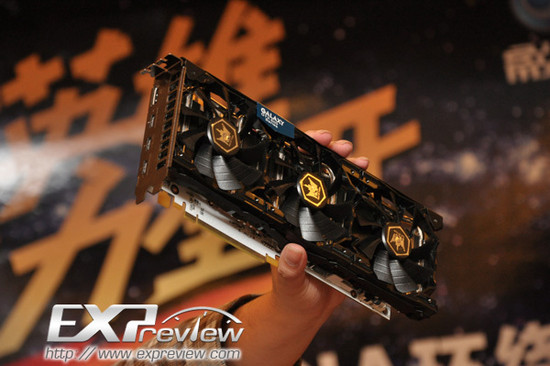 With dual 8-pin power connectors, dual BIOS circuits, 4GB memory and a might cooler with three 90mm fans Galaxy GTX 680 Hall of Fame Edition will be something out of the ordinary. The card also has a separate connector for the control unit ”OC Panel” that allows the user to physically control the card from a control panel.

Galaxy mentioned no clock frequencies or launch dates for its new HoF model, but the card will sport impressive overclocking potential.