The last bit of the NVIDIA GeForce GTX 580 puzzle is here, but the looks of it. After we revealed specifications and prices we now have a load of benchmarks. We see how GeForce GTX 580 cleans out with good performance and lower power consumption and less noise.

Italian website news4it.com has published four pictures with diagrams that looks to come from NVIDIA’s internal press material. We can’t say for certain that the pictures authentic, but the behcnmarks matches the estimates and rumors.

In the benchmarks NVIDIA compare the new flagship to GeForce GTX 480, and AMD’s top models Radeon HD 5870 and HD 6870. The perhaps most interesting comparison is with GTX 480 since the benchmarks were made by NVIDIA and most likely are handpicked to make the card shine. Previous stories have spoken of 15-20% better performance than last generation and if we compare with AMD the difference is everything from 15-80% in game tests, while DirectX 11 tests with Tessellation results in twice the performance in some cases.

Benchmarks from manufacturers should always be considered with a pinch of salt but we also see a comaprison with GTX 480 in terms of performance/watt and noise. Here we have good news all around where new and more efficient GF110 isn’t just more powerful but also more efficient.

GeForce GTX 580 looks to offer between 25-40% more performance per watt than the precursor and the new baby will also be quieter at load. With a noise level of 47 dBA the card will be quieter than not just GTX 480, but also GeForce GTX 280 and GTX 285. 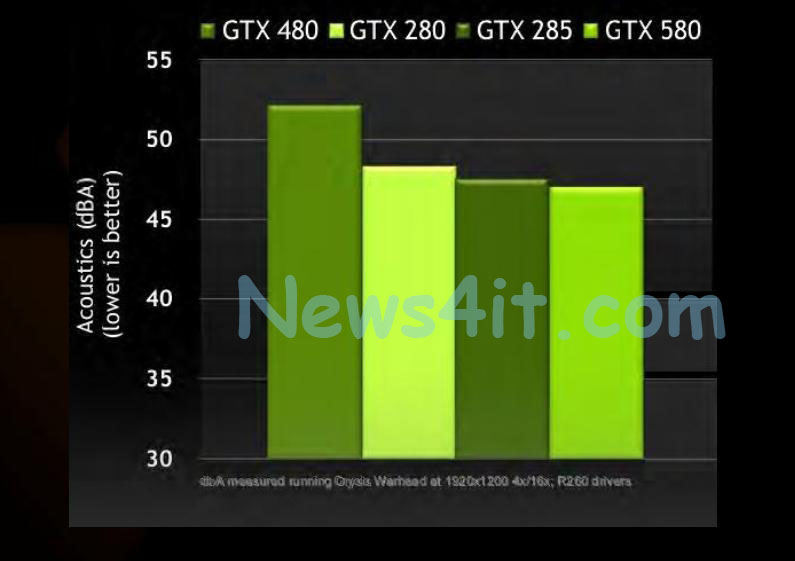 We look forward to impartial numbers with GeForce GTX 580 where all will culminate on November 9th, but we are already on the least that AMD will need a new single-GPU flaghip to keep up.