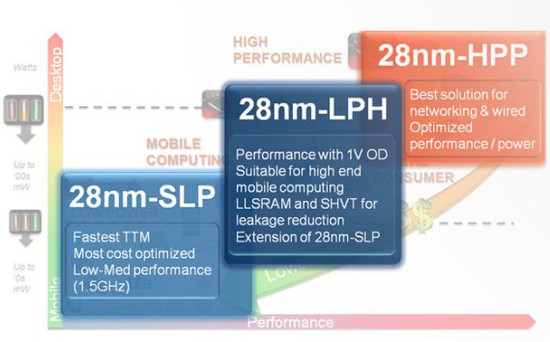 Semiconductor manufacturer GlobalFoundries has presented some new milestones in the company’s work with next generation manufacturing technology. Together with ARM the company has presented a Cortex-A9 processor operating at 2.5 GHz with 28 nanometer transistors.

GlobalFoundries intends to go up against other fabs like TSMC, the company behind the first generation 28nm GPUs from both AMD and NVIDIA. That GF can now show the first high performance circuits usin its new manufacturing technology is a good sign.

The company used its 28nm HPP (High Performance Plus) technology to manufacture the test circuit that with 0.85V could reach an impressive clock frequency of 2.5 GHz. The circuit it has now manufactured at the German fab in Dresden is just a test circuit and it will take a while before we will see similar mass production circuits.

”The companies announced the industry’s first test chip based on a dual-core Cortex-A9 processor operating at frequencies of more than 2.5GHz. In addition, a 20nm tape out using GLOBALFOUNDRIES’ Technology Qualification Vehicle (TQV) was also announced for SoCs based on Cortex-A9 processors.”

GlobalFoundries also revealed that is working together with ARM to do tests at 20 nanometer where it created a template for making Cortex-A9 based system processors with extra small transistors. The Technology Qualification Vehicle (TQV) that GlobalFoundries managed to get in its development of 20 nanometer is pretty far from any kind of production ready technology.

GlobalFoundries wants to show that it is on track for future manufacturing technologies and could become a serious competitor to TSMC to tighten the competition among semiconductor manufacturers, which is needed for others to keep up with Intel.