Intel will in a month launch the next generation Core processors and the heaviest piece of the Haswell program will be called Core i7-4770K. The processor will operate at 3.5 GHz, but has already been pushed over 7 GHz.

The result database for CPU-Z holds an overclocking result with Intel’s Core i7-4770K processor pushed up to 7,012.65 MHz. This is not far from the overclocking records with the current Ivy Bridge architecture where few processors can do above 7 GHz and the highest recorded overclock is at 7,186 MHz with an Intel Core i7-3770K.

If the overclocking is genuine we can conclude a couple of things. Intel’s new Haswell architecture looks to maintain a similar overclocking potential as the precursor Ivy Bridge and if this is not cherry picked engineering sample we should be able to expect similar results shortly after launch. Not the least thanks to the higher multipliers now available. 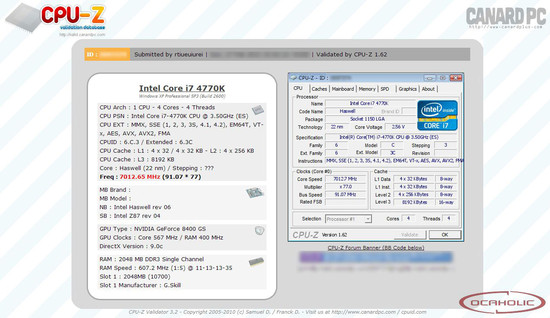 Overclocker ”Rtiueuiurei” uses a multiplier of 77x and bus frequency at 91.07 MHz to reach the final frequency. The equivalent CPU frequency of Core i7-3770K would have required a bus frequency of 111 megahertz, since Intel has limited the multiplier of Ivy Bridge to just 63x. According to CPU-Z he used a massive voltage of 2.56 V, but whether this is correct or not we don’t know at this time. The cooling was most likely liquid nitrogen.

Haswell and Ivy bridge uses the same 22 nanometers tri-gate transistors, but with a higher maximal multiplier and optimized manufacturing process we should see a new wave of Core i7 overclocking records when Haswell arrives on June 4th.