Intel has revealed more details on the future of the Atom platform and after ARM making some noise on the mobile market, Intel is gearing up big time. Intel revealed that the Atom platform will in the future use a similar tick-tock strategy as the regular CPUs, which will reach its end in 2014 with 14nm Airmont.

We have already reported on the plans for a new Atom architecture in 2013 that will be built on 22nm technology using Intel’s new 3D transistors. Silvermont is the name of the architecture and comes with a fresh process and a new base architecture. Already here Intel is expected to shrinki the node distance against the retail processors.

The large jump will instead come in 2014 when it rolls out the Airmont Atom architecture. It will bring 14nm technology and the introduction of the new Atom fmily will happen just months after Intel’s Core processors with 14nm technology rolls out. A radical improvement over today and a possibility to seriously get into the smartphone market and compete with ARM and its partners.

Intel Airmont will most likely be a ”tick” in the Atom strategy, which means the same base as Silvermont, but a fresh process. 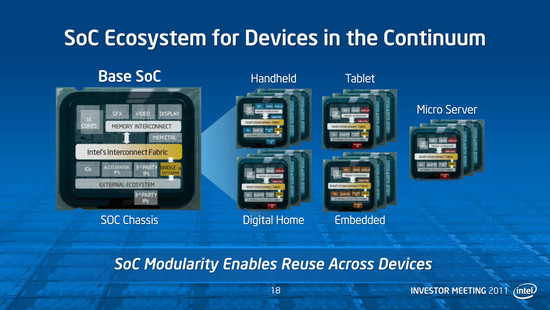 The world’s largest processor manufacturer looks to have set its sight and intend to grab large shares of the ultramobile segment. Beside the new 32nm Medfield platform that is expected to launch this year commercially Intel will continue to develop SoC-based Atom processors where it will be able to offer a variety of solutions for many different product categories. This is possible through a modular base design that scales in performance and power consumption. This venture will be introduced in 2013, most likely, together with 22nm Silvermont.