Intel hasn’t given up on its multi-core strategy and after recently shipping its 48-core processors to developers and researchers it has started experimenting for the future. The result has been a receipt for that processors with 1000 cores is coming.

Intel’s Single Chip Cloud Computer processor is working and all 48 cores are operational, but according to Timothy Mattson, scientist at Intel, the processor architecture is scalable, which would make it possible to build processor circuits with no less than 1000 cores.

The principle is that the architecture will be capable of widening in several steps, simply by adding more cores to the circuit. According to the latest calculations it is at four digits that the internal network – that connects the cores – becomes too big and complicated. This would in the end be negative for performance.

Intel pointed out that its current 48-core SCC processor isn’t that interesting from a performance perspective. What Intel is trying to evaluate is how well its data network can connect all of these tiny cores. The processor is made with 24 bricks where each brick contains two cores that relate back to Intel’s Pentium processors from 1994. 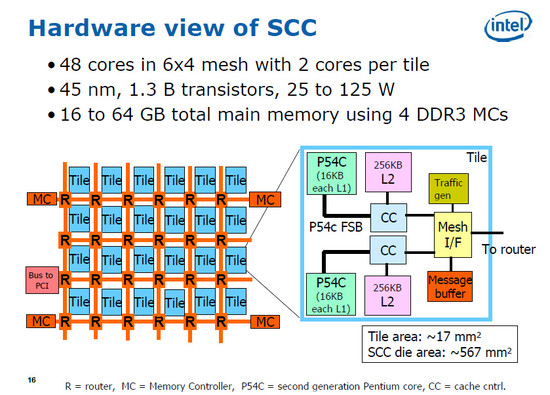 It is also important to optimize the bricks and its power consumption. This is done through dynamic control of the clock frequencies and voltages, which shows in the rated power consumption, from 25W up to 125W. Intel has also developed an 80-core CPU in the TeraScale program, but it is only used in research purpose.

The manufacturing technology that is needed to make a circuit with 1000 cores is a whole different story though. The even harder bit is to program applications that can use all of these cores.