Intel has its hands full with getting fixed Intel P67 and H67 chipsets out to partners, but now we here about the third retail chipset for Sandy Bridge, namely Intel Z68. Intel is planning to launch the first model, DZ68DB, in the first half of 2011.

Intel Z68 takes the best from P67 and H67 and creates a new platform for Intel’s LGA1155 platform and Sandy Bridge. The new chipset will support the integrated GPU, just like H67, but will also support overclocking with multipliers, which is only supported by P67 today. The first motherboard from Intel’s own fabs will be called DZ68DB and looks to arrive in Q2.

Intel DZ68DB gets SATA 6.0 Gbps, USB 3.0, overclocking, RAID and a number of video outputs to use the integrated GPU.

Intel DZ68BC will be Intel’s second model with the Z68 chipset and here it focuses on a complete list of features with support for CrossFire and SLI (2 x 8x PCIe) and Bluetooth and WiFi. There is of course also RAID, USB 3.0 and SATA 6.0 Gbps. The roadmap published by Xfastest says nothing about the video outputs on DZ68BC, which sounds strange but we will simply have to wait and see. 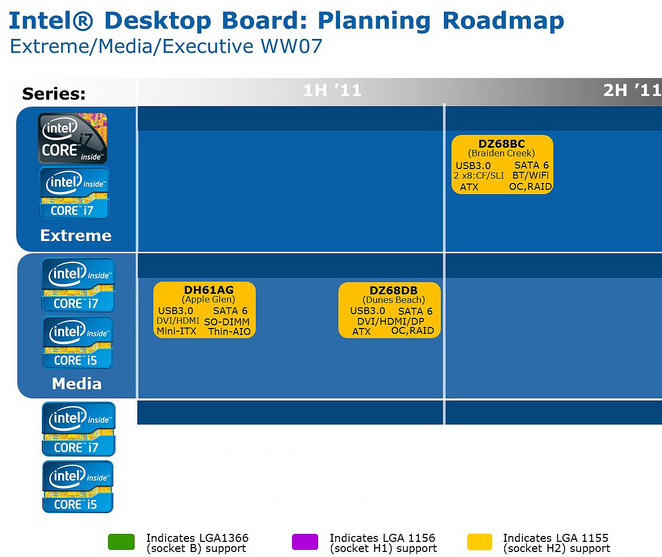 It should be noted that the rumored SSD Caching technology that Intel Z68 woudl offer will not be ready from day one. This functions that we don’t have the complete cover of yet will appear when Intel release its Rapid Storage Technology 10.5 driver.

Also Intel partners are expected to launch Intel Z68 motherboards in Q2 2011, a platform that feels more interesting than current shipset that are still struggling to find its way to stores.