LSI to use smaller and cheaper NAND chips with SandForce controllers

SandForce is one of the most common SSD controller circuit and the manufacturer LSI has announced that the controller is ready for the next generation flash memory circuits. During Computex it connected a SandForce controller to 19nm NAND chips.

LSI confirmed that 19 and 20 nm NAND will go into mass production soon. We got hints of this during our interview with SanDisk earlier this Spring. The new NAND flash circuits will replace the current 25nm chips and enable the manufacturers to lower the manufacturing costs and in the end the store prices.

During Computex LSI showed its SandForce SF-2281 controller connected to both 19nm Toggle DDR NAND from Toshiba and 20nm ONFI NAND from IMTF. The benchmarks presented were not spectacular, but the read and write speeds at 500 MB/s and 60,000 IOPS during random 4K writes is on par with current SandForce units. 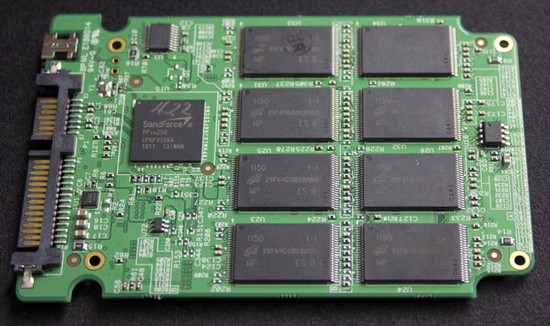 The big win with a smaller manufacturing technology is that each wafer houses more NAND circuits and the cost per wafer drops, but this is only true as long as the yield is high and at the same time other problems appear as the node shrinks, among others shorter lifespan. This is something both LSI and the memory manufacturers are trying to counter with new technologies and optimizations. The big improvement is that we will see more powerful SSDs at below 1 Dollar per Gigabyte.

Interestingly LSI opened for other interfaces next year. SATA is what matters in 2012, but PCI Express looks like the most interesting for the future and considering SATA 6.0 Gbps is already being pushed to the limit this sounds like a mature decision.