OCZ has released its next generation PCI Express SSD called RevoDrive, targeting consumers who don’t mind paying extra for extreme performance and functionality. The new RevoDrive 3 comes with up to four SandForce-2281 circuits working in a form of RAID, supports TRIM and speeds up to 1.5 GB/s, 230,000 IOPS together with other functions normally just found with business drives.

RevoDrive 3 will be the line SSD OCZ will use to target the most fastidious retila users. RevoDrive 3 use several controller circuits to reach higher levels of performance, like RAID-0 but in OCZ’ own way with its own SAS controller. We will be seeing two series, one will be RevoDrive 3 with two SF-2281 in RAID, while RevoDrive 3 X2 sports four controllers.

The big news with RevoDrive 3 is VCA, Virtualized Controller Architecture, that uses an in-house SAS RAID circuit that splits data and sends different parallel I/O to the different controllers. This makes it possible to get the same performance as RAID, while maintaining the TRIM support. 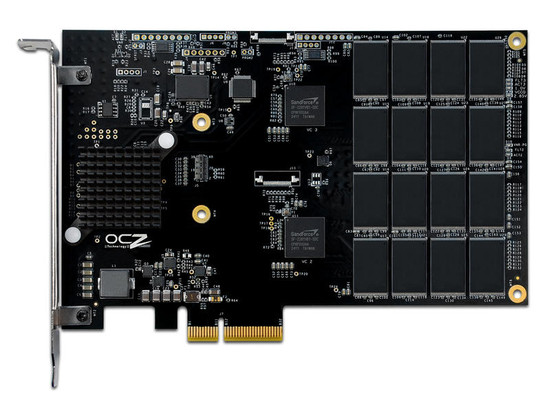 We hope to see more of RevoDrive 3 X2 in the near future.