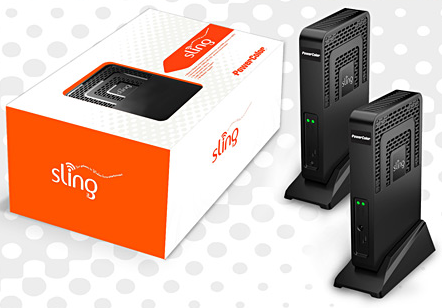 PowerColor has presented a new product it calls SlingIt. According to the company it will transfer or sling movies to other units in the home, and all you need is an HDMI input. Other than that it is plug’n’play.

SlingIt solves one of the biggest problems of today, which is pulling cables all over the house. What you need for SlingIt to work is two units with a HDMI port, fo example two TVs or a notebook. It also works to connect a DVD/Blu-ray player and receive the picture on a TV in another room. You connect the SlingIt Transmitter to the unit that should stream and SlingIt Receiver to the unit that is supposed to show it.

PowerColor SlingIt is a plug’n’play solution that means no software is required, just plug it in … and play. SlingIt will support 1080p, without delays on a distance up to 25 meters.

Besides streaming movies, it will also be possible to stream games from a computer to a TV in another room. SlingIt supports HID and IR which makes it possible to control with a regular remote, or keyboard and mouse if they support IR. Also this will be easy to perform since PowerColor says there are no drivers needed for SlingIt.

SlingIt will start shipping next month, and that includes a Transmitter and a Reciever dock, but Receivers can be bought separately for streaming to several devices at the same time.