For the first time we feel that we are getting close to AMD’s new architecture Bulldozer. The first presentation slides meant for press and media has leaked, and it looks like previous leaks have been pretty correct.

The wait is soon over, and AMD’s first architecture build from the ground up in 12 years is finally about to launch. Performance has been rumored to be less than Core i7-2600K, something we have had a hard time believing since it would be a processor AMD has marketed to bring eight cores. The first performane estimates has been shared by Donanimhaber, directly from the press kit that media will most likely get before the reviews. 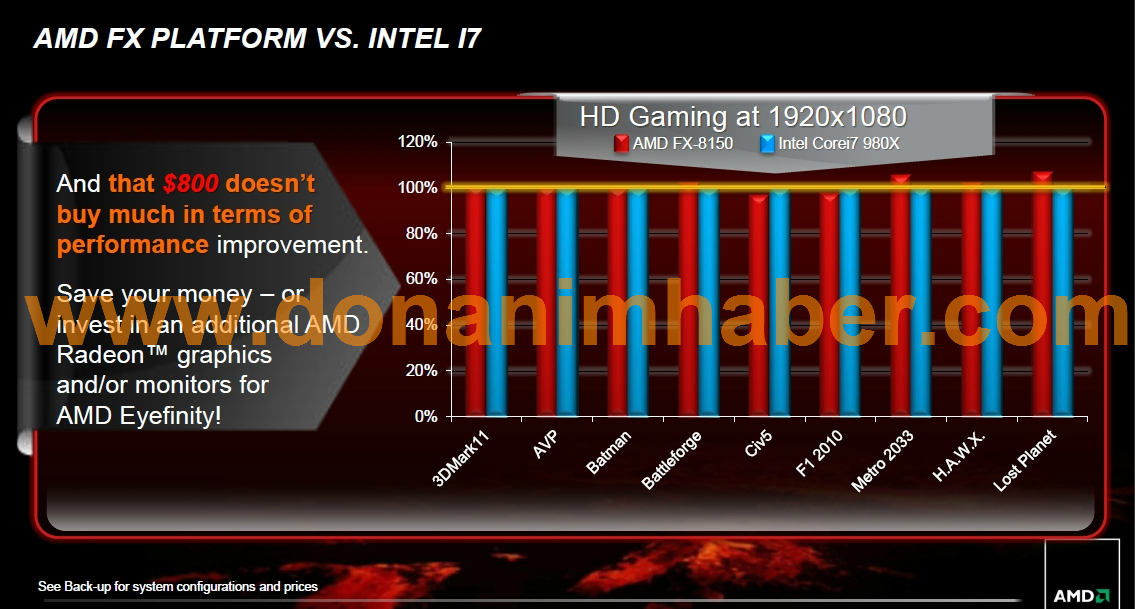 It compares FX-8150 with Core i7-980X in games at 1920 x 1200 px resolution. We see that according to AMD’s internal tests the new processor keeps up with the much more expensive processor from Intel, but are in some cases below, and sometimes above. No major differences. 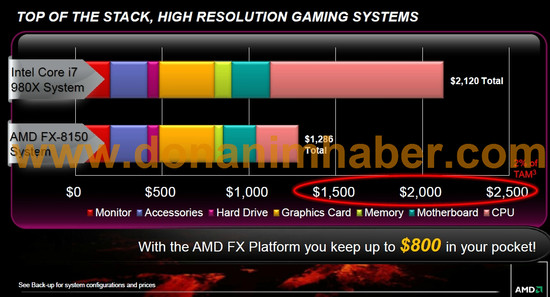 It compares the prices of an entire system, with AMD’s alternatives against Intel’s. The price is certainly better, but at the same time it feels redundant when we talk games. Intel’s Core i7-980X and 990X will soon be replaced by the more powerful Sandy Bridge-E, and there are two processors that should perform better in games – Core i5-2500K and Core i7-2600K. 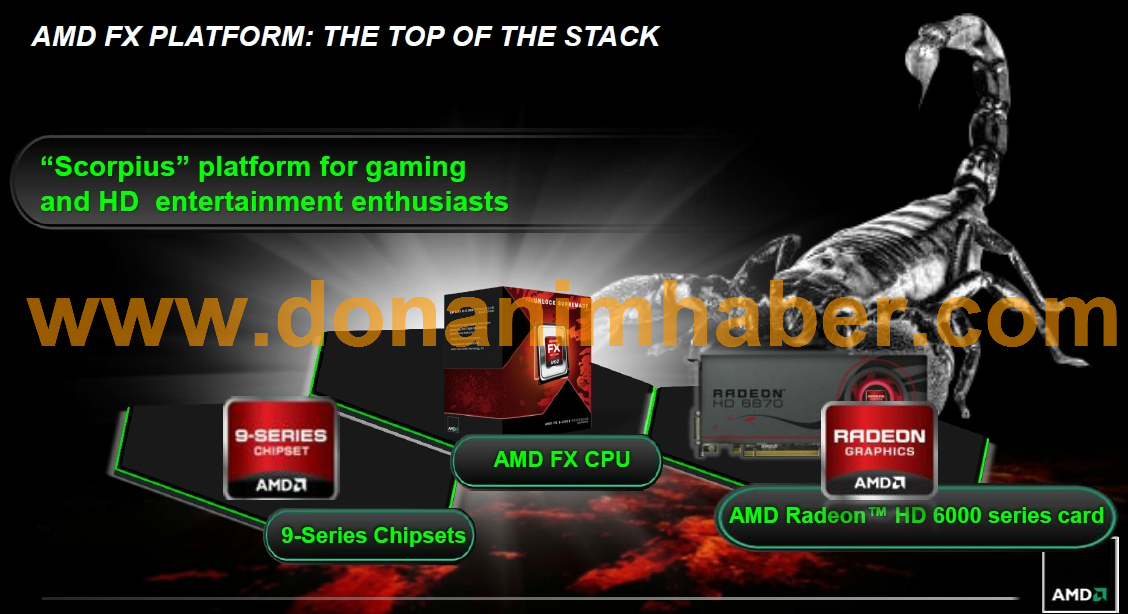 The new platform where the FX series processors is included will be called Scorpius, wth a focus on gamers and HD entertainment. We see the refurbished 9 series of chipset and HD 6000 series are also part of the platform. 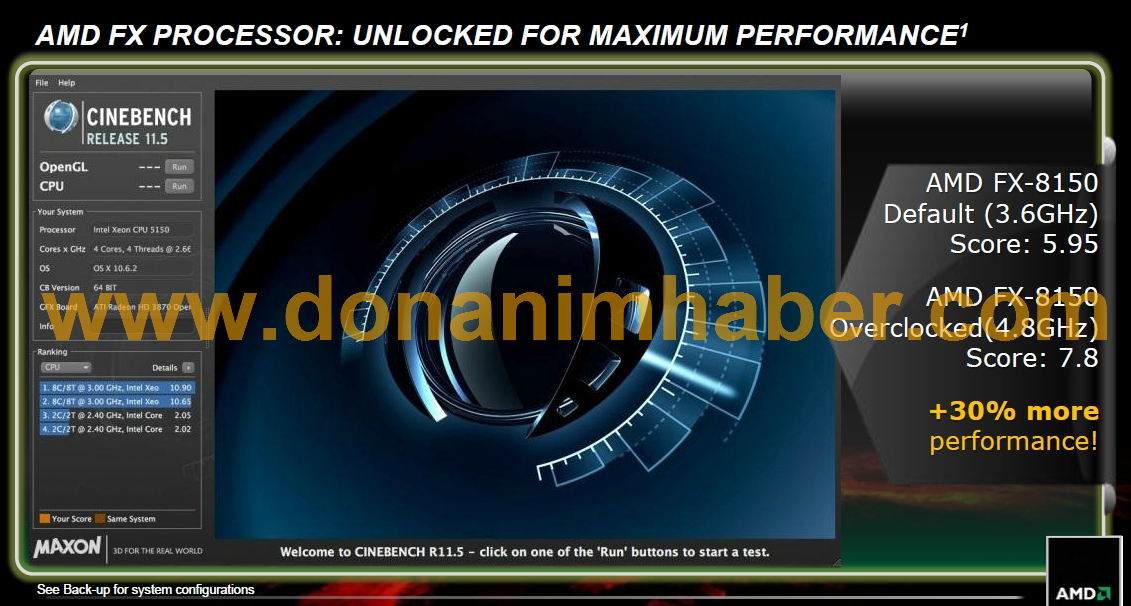 Here are the first data that speak of the performance of the new processor architecture. In our own tests the currently fastest processor with six cores, Phenom II X6 1100T 3.3 GHz scores 5,77 in Cinebench. FX-8150 3,6 GHz scores 5.95 even though it has two more cores, and 300 MHz advantage. It also confirms the high overclocks that will be possible. In AMD’s example the processor hits 4.8 GHz and scores 7.8. 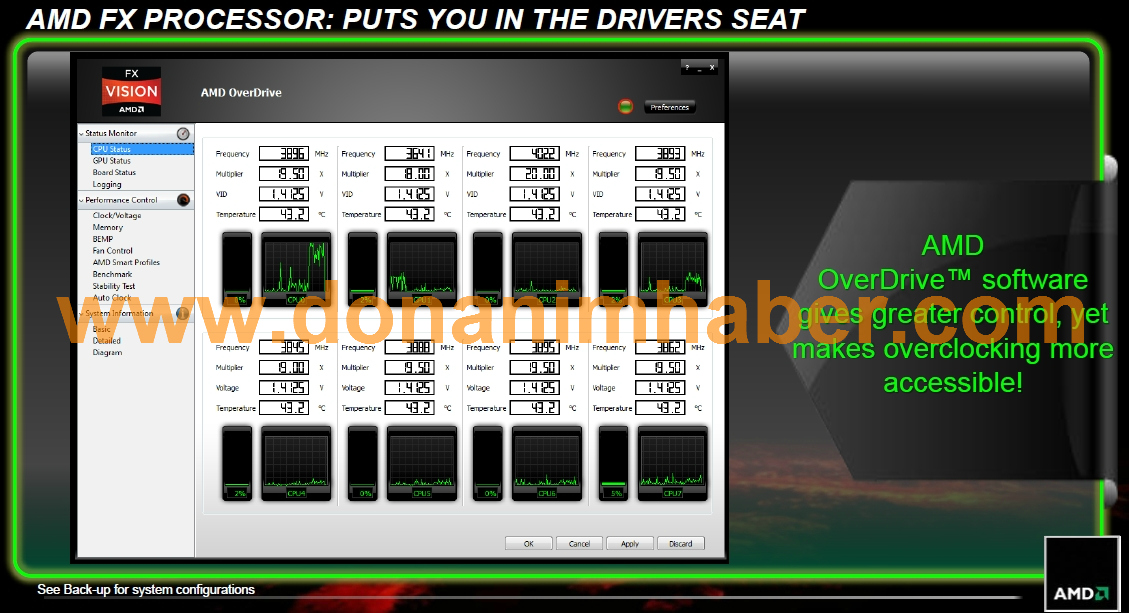 AMD OverDrive will be updated to support the new architecture with eight cores. There is talk about more settings, and better support for graphics cards in OverDrive, but this is nothing we can confirm today. 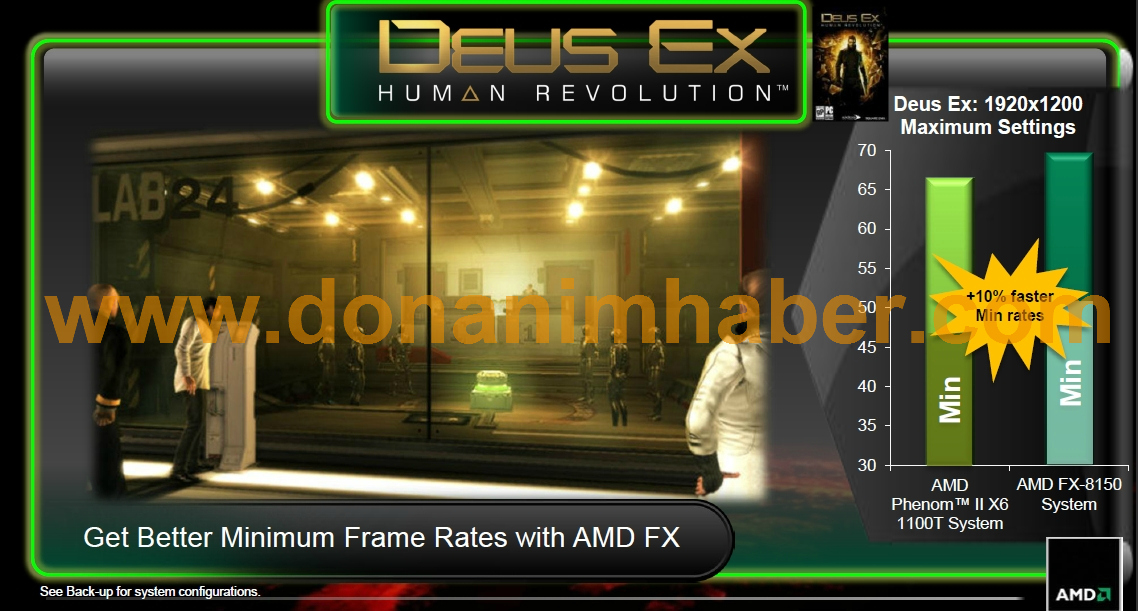 Despite the performance in Cinebench r11.5 that may comes as a disappointment for some, it continues to point to games and says that FX-8150 offers higher minimum-FPS over the Phenom II X6 1100T. 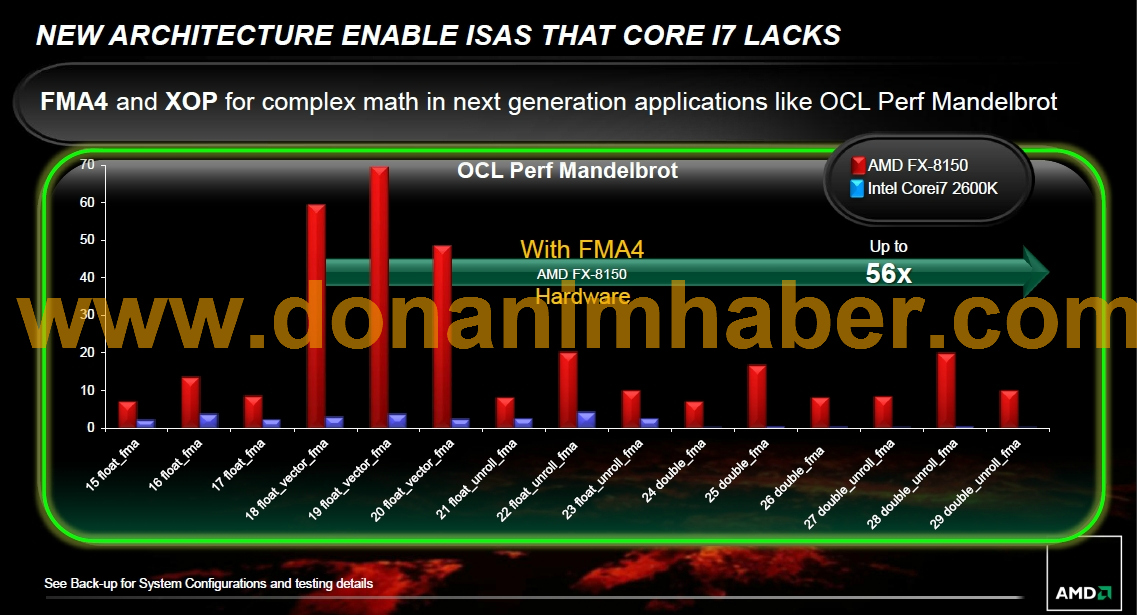 AMD Bulldozer will bring new instructions like FMA4 and XOP, which Intel currently lacks. This is pointed out and shows how these can be used to perform complex mathematical calculations up to 56x faster than Intel Core i7-2600K. The problem with this is that the applications has to support the new instructions, and then not all code is suited for the advantage AMD possibly has over Intel. 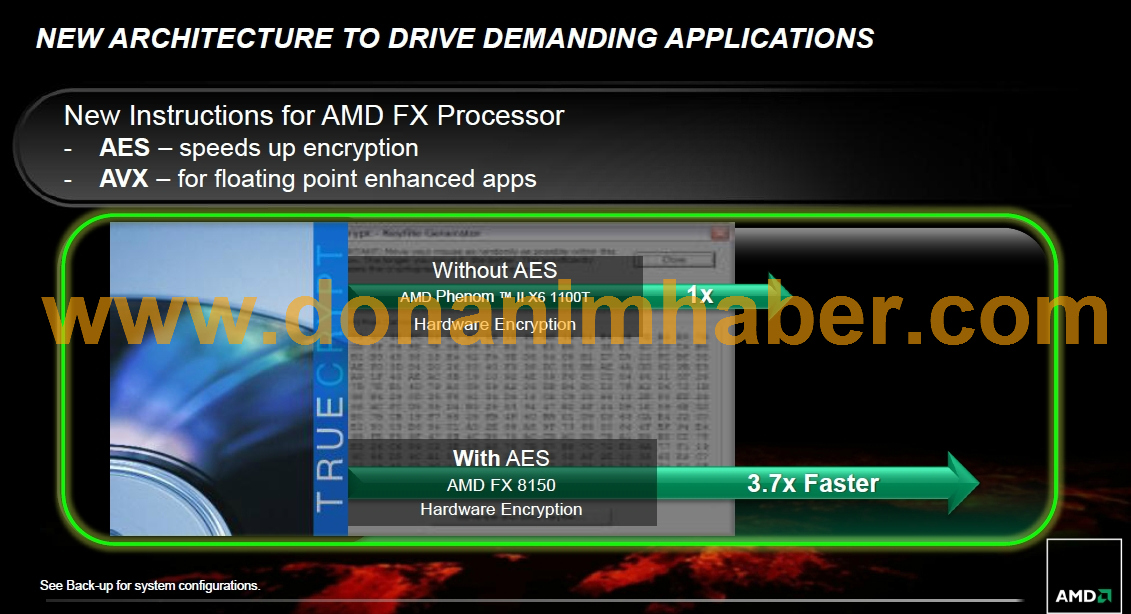 Intel introduced AES, an instruction code for encryption in its forst 32nm processors. AMD now follows, where the FX-8150 will be 3.7x faster with TrueCrypt, compared to Phenom II X6 1100T. 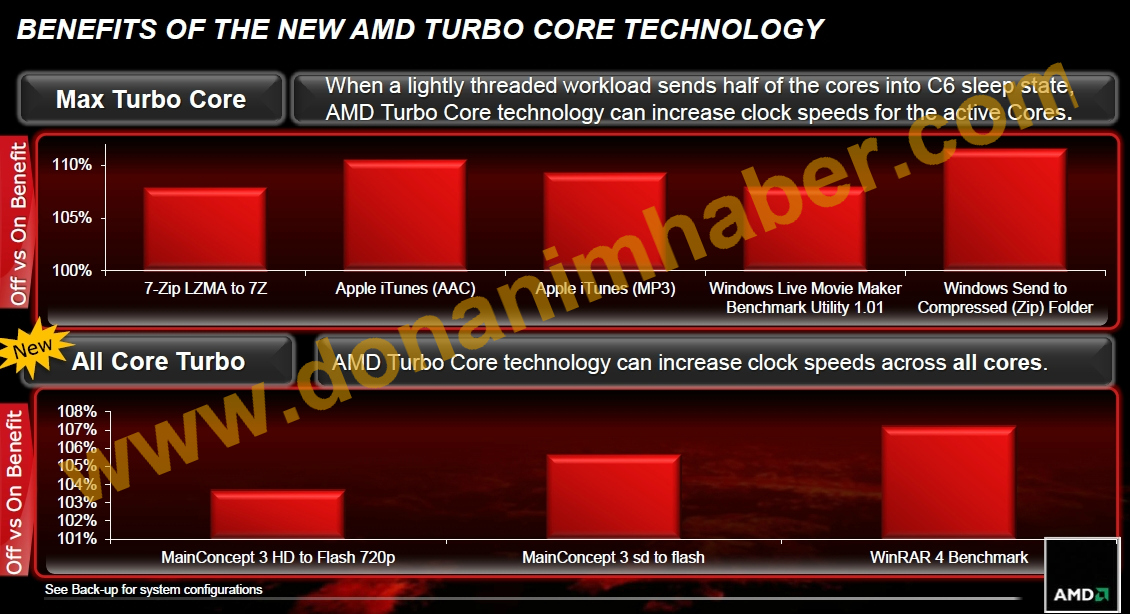 There have been many discussions about AMD Turbo Core 2.0, and unlike the first attempt in Phenom II X6 1090/1100T ”Thuban” this version really works. If we are to believe AMD its Turbo Core will work with basically all kinds of applications, no matter how many cores that are being used. Now comes the first benchmark comparison with the more interesting processor models. It has Intel Core i5-2500K as the baseline at 100%, where FX-8150 outperforms it across the board, except in ABBYY OCR10. Intel Core i7-2600K and FX-8150 are a close call, but it looks like Core i7-2600K is slightly ahead. 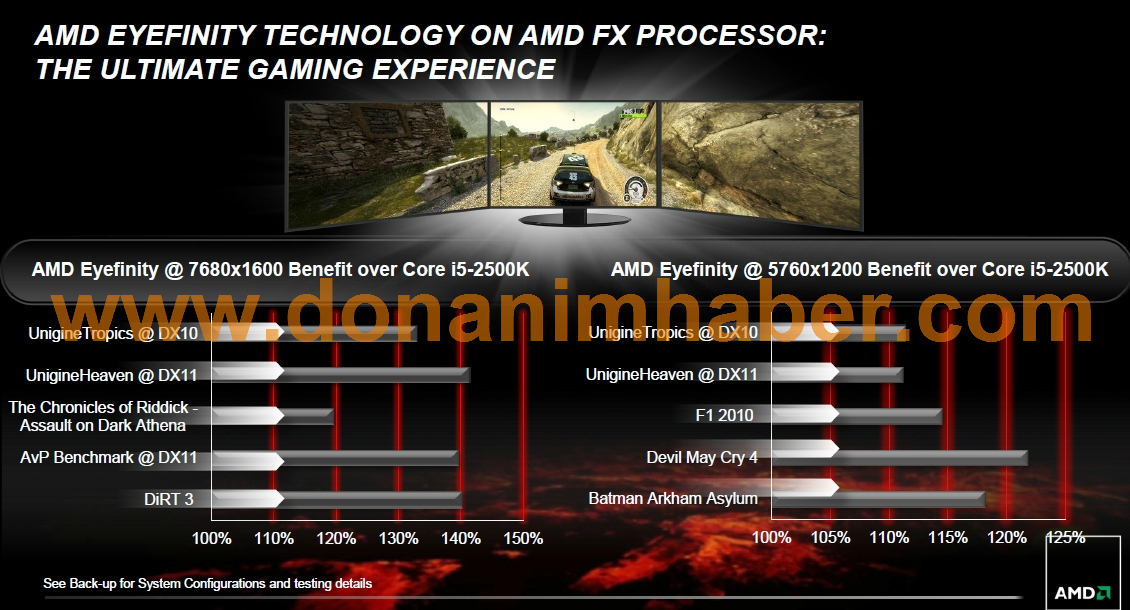 It moves on to games, now with Eyefinity and three displays. Since games are not known for being limited by the processor at high resolution, we question the use of such a test, but it does outclass Core i5-2500K. 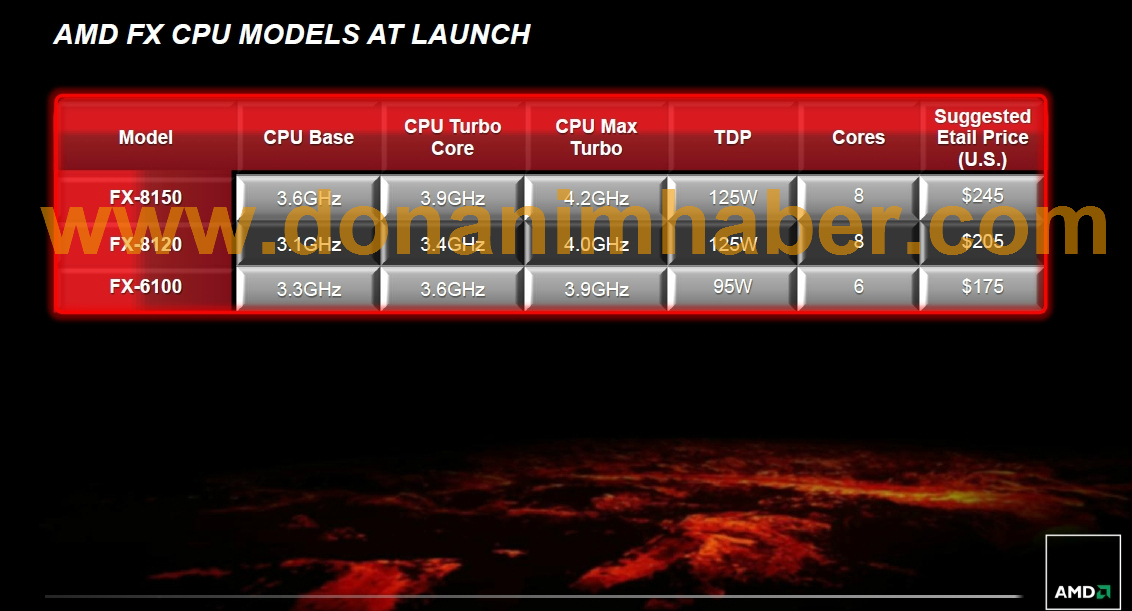 The processors that will be available at launch are FX-8150, FX 8120 with eight cores at 125W TDP, and FX-6100 with six cores at 95W TDP. The prices we reported on earlier looks correct and it seems the top model will be less than 200€. CPU Turbo Core, is the frequency all models can achieve when all cores are used, while CPU Max Turbo shows the clock frequency the processor can reach when half of the cores are in use. 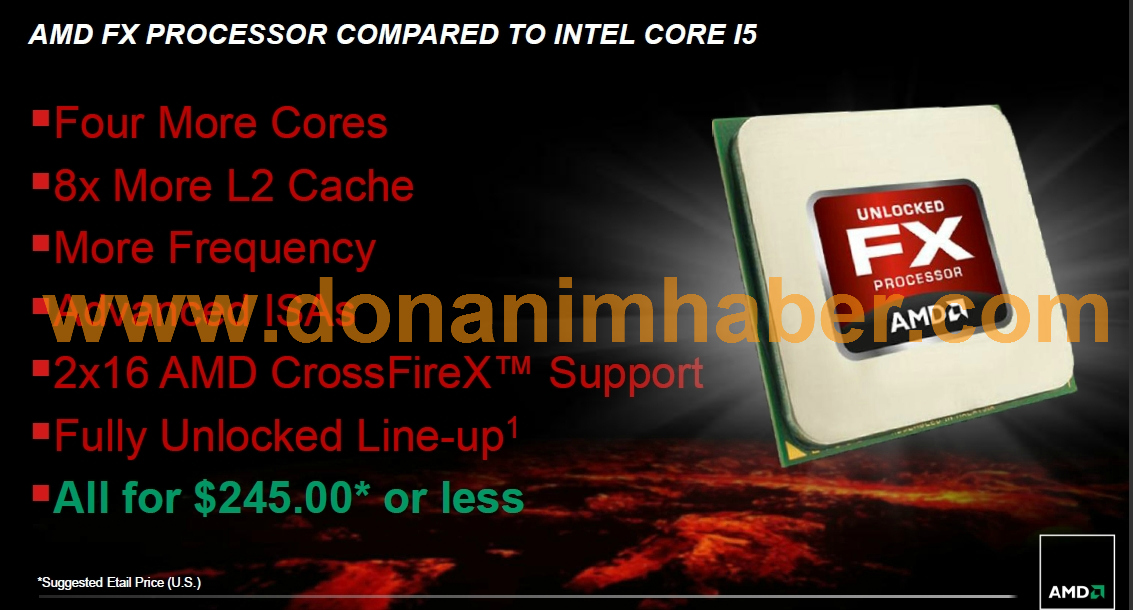 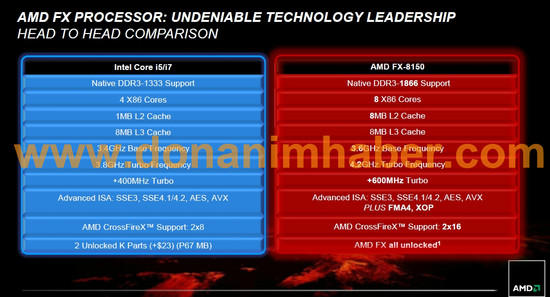 Here AMD shows the advantages of its processor, and platform, over Intel Core i5/i7. There is not much to argue over here, but AMD is correct on all points, but what looks good on paper doesn’t have to represent reality. 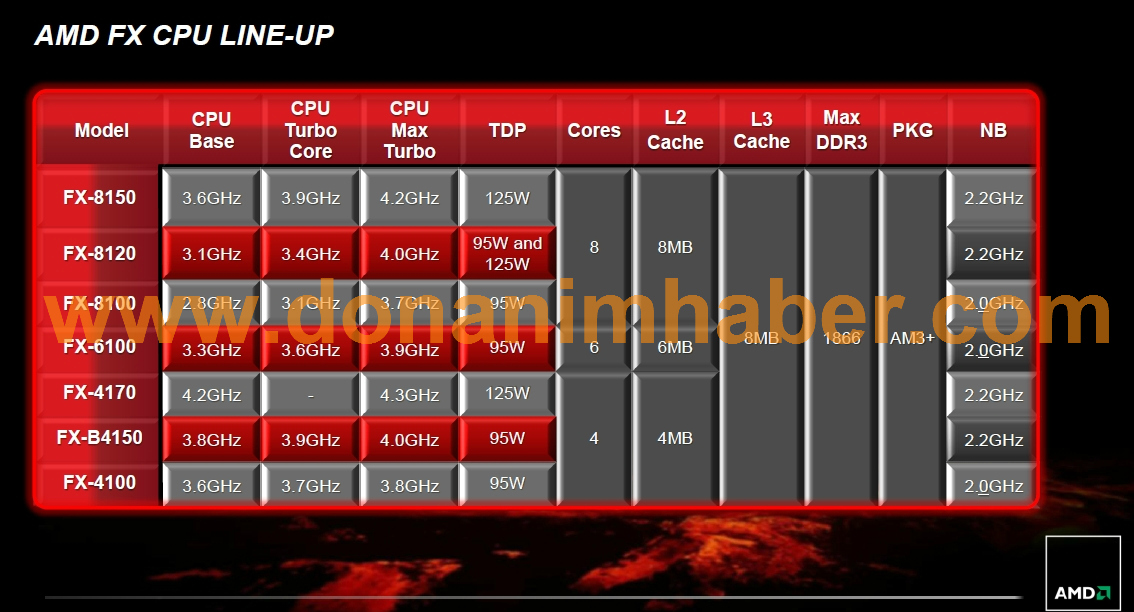 There will only be three models at launch, but there are more coming. FX-8120 will sport the exact same specifications as before, but only 95W TDP. FX-8100 will be the entry model for the octo-core line.

The clock frequency of the northbridge has also been revealed, and it lies at 2.0 to 2.2 GHz depending on model. 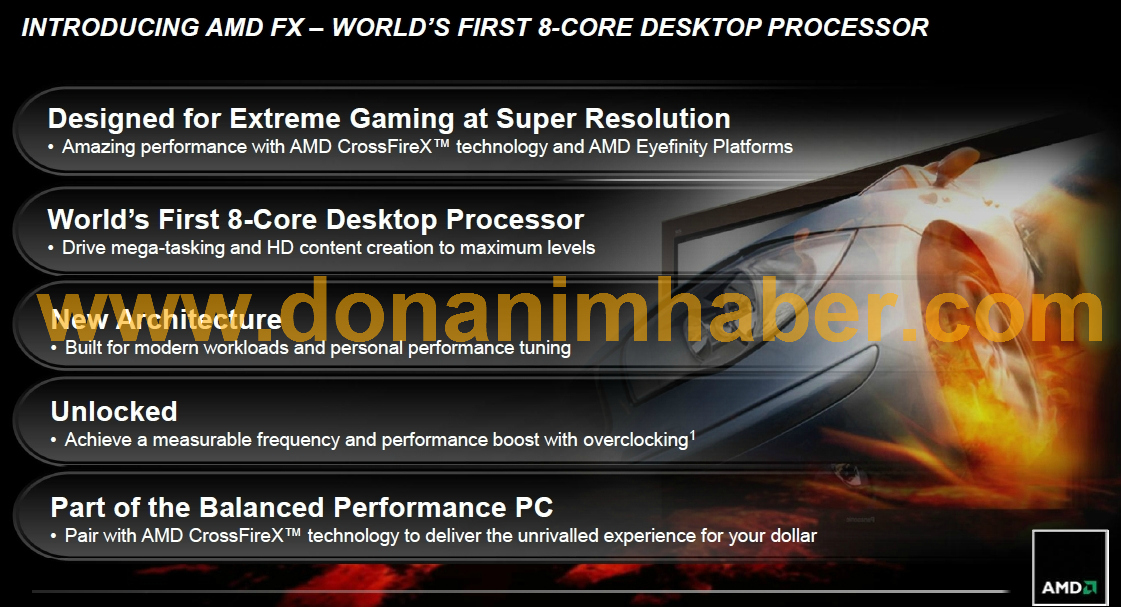 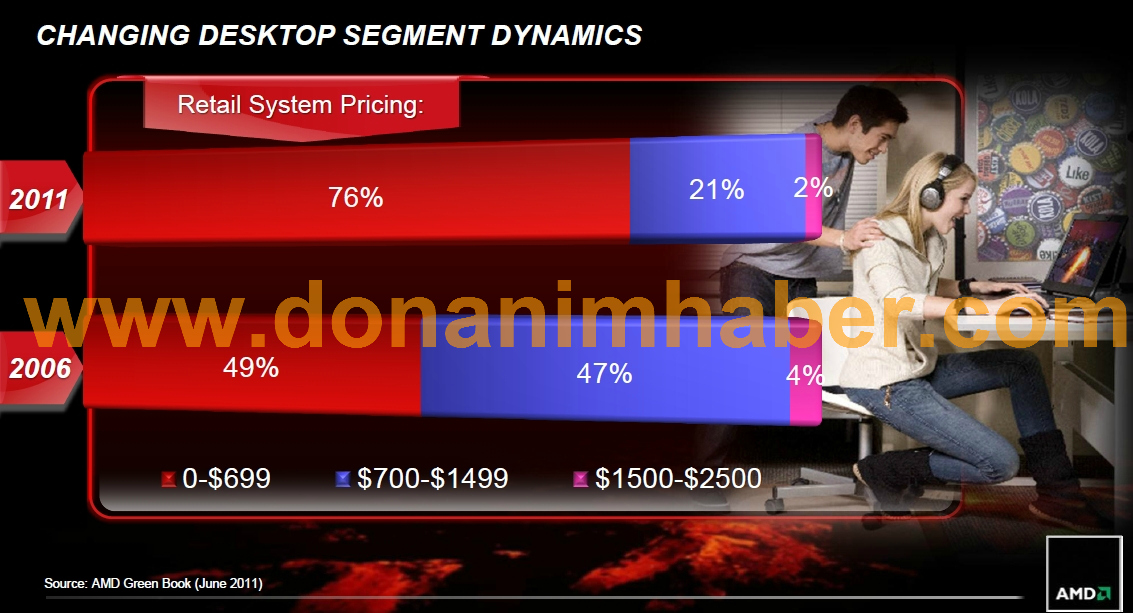 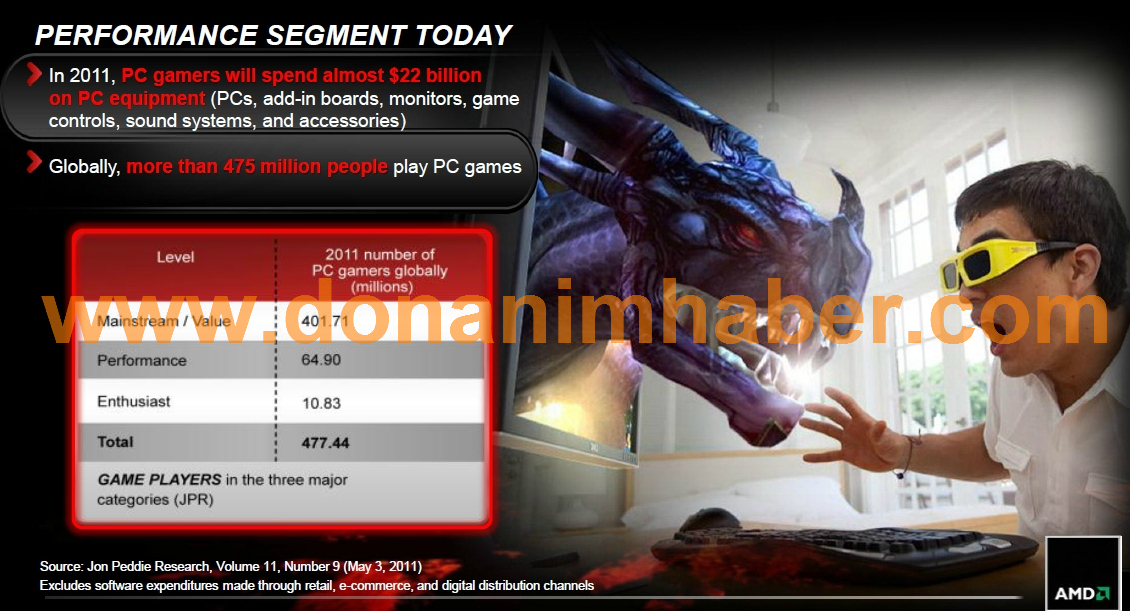 The end price for a computer has dropped substantially since 2006 and buying a complete system for just a few hundreds of dollars is a lot more common today. We see the same slide we saw at the Llano launch, where AMD talks about the gamers in the world. AMD focus on offering best performance, at the lowest price and doesn’t really target the high-end segment where Intel will continue to reign. 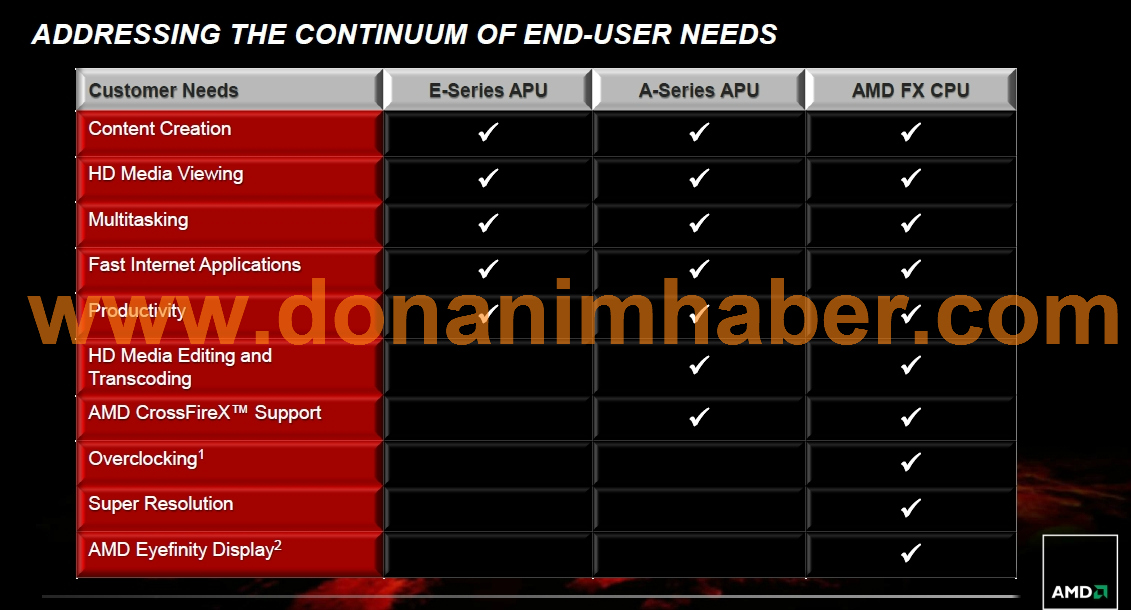 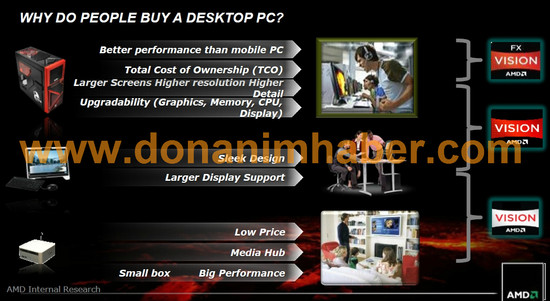 Here we have AMD’s lineup summarized. The FX series is for the overclockers, playing games at high resolutions and/or use Eyefinity. Its APUs will be enough for those who does not have these requirements, and we dare to say that in most cases, though not all, AMD is correct. 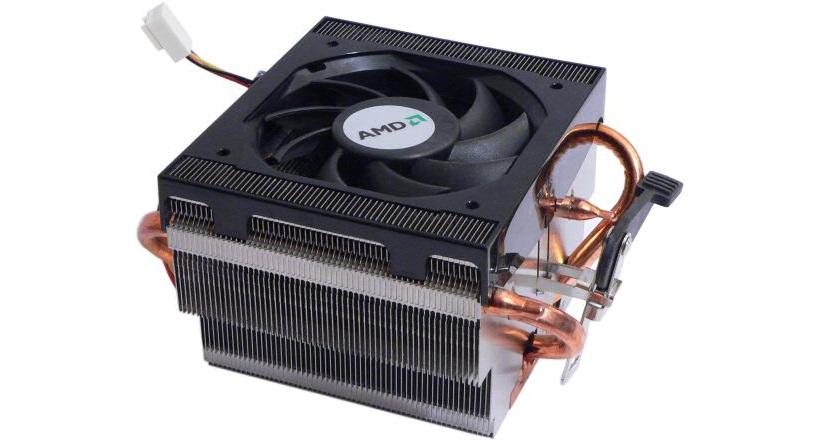 According to AMD the world’s fastest graphics card is HD 6990, but we know that HD 6990 and GTX 590 are quite even. None is clearly faster than the other, it all comes down to the game you are playing. It also brags about the new world record, that will be registered with Guiness World Records. 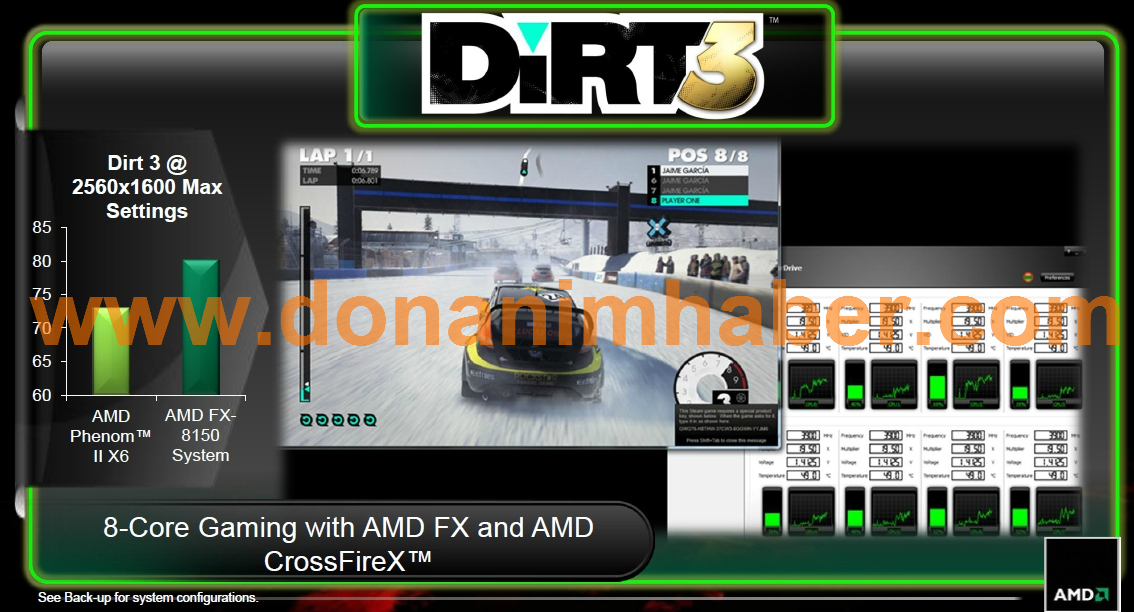 AMD finish with a slide that once again show the gains of the new processors in games, but this time compared to Phenom II X6 and inte Core i5.

Editor’s view of the FX series

AMD clearly shows that the FX series will not be competing against Sandy Bridge-E and Socket LGA2011, but keep in the mid-range and performance segments. It keeps focusing on offering performance that is good enough for most, at a good price. There is nothing wrong with such a strategy, since it has lowered the bar additionaly for FX-8150 with prices less than 200€.

With AMD’s new CMP-based architecture, it will bring more cores to most market segments, but it makes it harder to predict performance in single-threaded applications from these slides. Games are hardly known for using many threads, but it is starting to get better. AMD FX looks like a good gaming processor, but as usual when it comes to slides the numbers should always be considered with a pinch of salt.

FMA4 and XOP does boost performance. The problem is that applications need to support the new instructions, but there are also questions to when FMA4 and XOP can be applied. With HPC and servers where many complex calculations and many write their own software, it looks like a nice sales argument for AMD, but for retail things are a lot more cloudy. We will simply have to wait and see when software supports these instructions, how large or small the improvements will be.

The AMD FX series doesn’t look to revolutionize the industry. With the marketing material showing it as the world’s first octo-core processor we expected more. It might have been better to market the top models of the FX series as quad-core models, since it would not have been wrong from a technical perspective. Whatever we choose to call it, the FX series will perform the same.

This is not a failure by AMD. It has designed a processor that can compete in both performance and price, which is the most important. It can keep up with Core i7-2600K according to the slides. It will not be competing with Intel’s hexa-core processors in the Sandy Bridge-E family, but will cost almost twice as much as what AMD will be charging for FX-8150, and the motherboards will also cost a lot more.

One thing is for certain though, the launch is not far off, and we hope to get our final answers soon.