Sandia National Laboratories sounds more like a research company than a cooling manufacturer, and we’re perhaps not surprised to hear that the Sandia Cooler is something out of the ordinary. Sandia has developed a patented cooling technology that eliminates the need for noisy fans in favor of a cooler that rotates at thousands of RPM.

Sandia calls the technology and cooler for Air Bearing Heat Exchanger and will be quieter and more efficient than current air coolers. Sandia has applied for patents on the cooling technology developed by scientist Jeff Koplow. The big goal is to make it commercial, where Sandia specifically sees a need on the server market where energy efficiency is of utmost importance.

Besides improved cooling for microprocessors Sandia’s rotating cooler will be interesting for other markets, e.g. air conditioners and heating systems. According to estimates the Air Bearing Heat Exchanger would have potential to reduce the energy consumption of the USA with more than 7 percent, which we presume include a whole lot of markets. 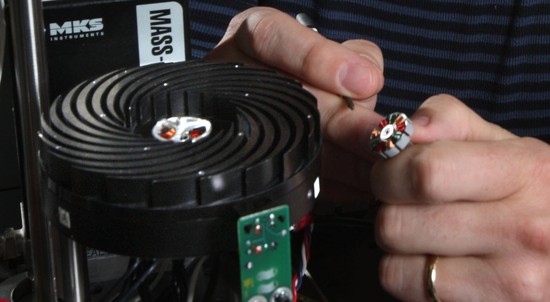 Besides lower energy consumption the technology also has higher coolling capacity and be overall smaller than our massive CPU coolers of today. The technology builds on the fact that moderns coolers are limited by a layer of dead air that sits as a layer over the heatsinks and stops the heat from escaping.

By building the cooler with a solid base and then attaching a rotating heatsink just 0.03mm from the solid copper base Air Bearing Heat Exchanger shrinks the air layer by 90%. This results in more efficient cooling and reduce the size. Even though the heat has to move through the air to reach the rotating heatsink this is not a bottleneck since the powerful centrifugal force and the extremely thin air clayer has a high thermal transfer capacity.

The technology has been tested with good results with PC processors, and Sandia mentions both notebooks and gaming systems as potential uses. Through the aerodynamic design the noise is minimal, while the cooler will not collect dust and dirt like regular fans do.

On paper Sandia’s cooling solutions sounds like a really exciting invention and we hope to see more of it in some sort of retail suit. Those who want to know more of Sandia Air Bearing Heat Exchanger a big report can be found at Sandia’s website (PDF).