Intel’s enthusiast platform Waimea Bay with its LGA2011 socket has a new launch date. The latest rumors speak about a launch in November, but then with a stripped down X79 chipset and some unexpected restricted overclocking. According to reports BCLK frequencies will be severely limited with Sandy Bridge-E.

Intel has been praised for its Sandy Bridge architecture and rightly so, but the perhaps biggest problem is the synchronous data buses where the now infamous BCLK frequency (Base clock) controls the speed of not only the processor but also PCI Express and SATA units, among others.

With Sandy Bridge this has limited the overclocking potential when changing the BCLK frequency and instead Intel has unlocked the higher multipliers to party satisfy overclockers. This is a convenient solution for the everyday overclocker, but hardly optimal for the hardcore users. 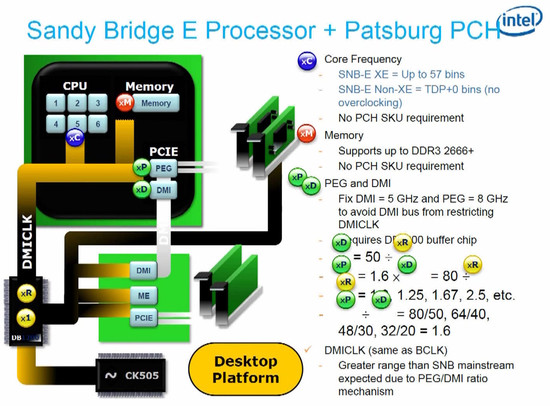 Alas it seems that the high-end enthusiast platform Waimea Bay will only offer limited BCLK overclocking. According to VR-Zone Intel will open up five different BCLK frequencies with Sandy Bridge-E. Besides the references speed at 100 MHz there will be locked values at 125 MHz, 166 MHz, 200 MHz and 250 MHz.

Together with unlocked multipliers on chosen models this will enable extreme overclocking for some tremendously high frequencies, but at the same time it will be trickier to optimize the overclockings. If we apply the 5-10 percent of BCLK overclocking that can be done with Sandy Bridge today we see that there is a considerably gap between the frequency increments.

Sandy Bridge-E will have several BLCK dividers to make a lot more free than the mid-range version Sandy Bridge, or for that matter Ivy Bridge that will come sin H1 2012. Ivy Bridge is said to have only one BLCK increment above 100 MHz, namely 133 MHz.

Intel’s LGA2011 socket is the largest so far

Whether the preprogrammed BLCK frequencies is something Intel has planned from the start is uncertain, but since the company decided to strip the Intel X79 chipset in several ways to reach a launch in November the BCLK steps may be a late solution. Among others it skipped the SAS support and extra SATA 6.0 Gbps ports, which means Intel X79 will be very similar to Intel P67 with only two SATA 6.0 Gbps ports and there is no PCI Express 3.0.

But the launch is said to be slated for November, which at least narrows the timeframe.