Toshiba gets 16h battery time with Core i processors

Dynabook RX3W is a new series of portable computers from the producer Toshiba that are built on proportionately powerful and heavy driven Core i processors. Despite this Toshiba have succeeded in getting up to 16 hours of battery time out of their new machines.

To reach max battery time a bigger 9-cell battery but even with this equipment the 13,3-inches big computer doesn’t weigh more than 1,4 kg (3 lbs). If you choose the standard equipment with a 6-cell battery the battery time lowers and the weight to 11 hours resp. 1,25 kg (2,75 lbs). The computers profile also differs on the count of the 9-cell battery builds up some centimeter, from 24,7mm to 40,9mm.

Toshiba RX3W can be equipped with Intel’s Core i5 520M or a Core i350 CPU, both with relatively high power consumption landing on 35 watts. Like ASUS have earlier proved that it’s possible to squeeze out a heck a lot of battery hours even with these processors and for those who wants to go all the way and save energy you can equip your RX3W with an SSD-unit on 128GB. The standard model comes with a 320GB HDD.

The computer can be quipped with either 4GB or 8GB DDR3-RAM and comes with a wide range of utilities like memory card reader, HDMI-output, fingerprint reader, WiFi 802.11n, Bluetooth 2.1 and eSATA and USB-ports.

With high performance, nice functionality in a slimmed format there also comes a high price tag. The base model costs around 15 000 SEK ($1 955) and fully equipped the price for Toshiba Dynabook RX3W come close to $3650. 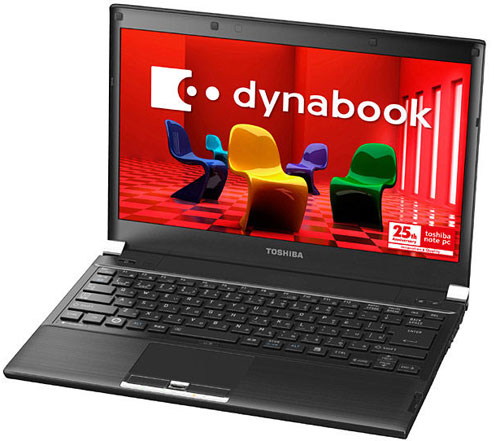