Western Digital has announced it has started shipping the new high-end SiliconDrive N1x 2.5″ SSDs. Unfortunately for all us consumers, these drives have been designed for tight OEM applications with high performance requirements and not retail use. The drive sports SLC NAND flash memory circuits, which are in general faster than the more common MLC NAND flash circuits found in most retail oriented solid state drives, but on the other hand more expensive and has less storage capacity.

SiliconDrive N1x uses SATA 3.0 Gbps to achieve the target read speeds of 240MB/s and write speeds of 140MB/s. This is not as impressive as the latest retail SSDs, but WD says these drives have been tweaked for maximum drive endurance and ships with five year warranty. The drives ship with Native Command Queuing (NCQ) and Windows 7 TRIM ready in the firmware for the 128GB drive. We’re a bit curious to learn what the IOPS and 4KB read and write speeds are. 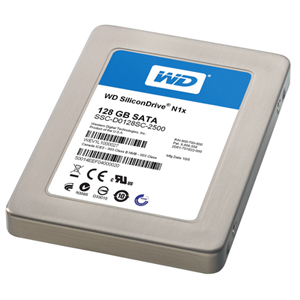 Fortunately, WD has also announced the new SiliconEdge Blue SSD, which will make it into retail channels. Unlike the SiliconDrive N1x, SiliconEdge Blue uses MLC NAND flash circuits and this shows when you compare the two. The retail drives sports twice the capacity, 256GB, but WD has managed to keep the read and write speeds at very respectable speeds though.

WD SiliconBlue has specified sequential read and write speeds of 250MB/s and 170MB/s respectively. These speeds are competitive with the currently available SSDs from competing companies, and WD trumps this with native SATA 3.0 Gbps support. Prices and models listed in the table below the picture.