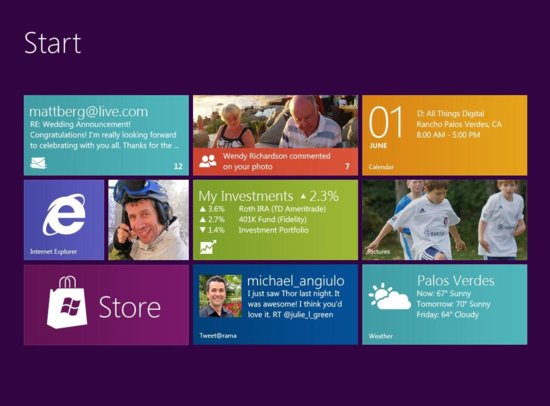 The moment you have all been waiting for has arrived, after Windows 8 Developer Preview Microsoft has now released the Consumer Preview. This is the version that is most similar to what Windows 8 will actually look like when it is ready, and the new Metro interface is of course in focus.

Windows 8 Consumer Preview is now available for download, and the focus in this version is on the Metro interface that Microsoft will bring to the tablet market. Consumer Preview is much alike the Developer Preview that has been out for some time, but the company has listened to the feedback from developers and testers and made changes accordingly.

In the Consumer Preview we find Internet Explorer 10, and the ”App Store”, called Windows Store, where there are several free apps to download and test. Requirements are not too high, which is a good sign for the coming ARM systems that are supposed to run the operating system:

The ISO file is available at Microsoft’s website at 2.5 GB and 3.3 GB for the 32-bit and 64-bit version, and to being with they are only for x86 systems. This is simply because there are no compatible ARM units on the market, and Microsoft needs more time with that version. We should add that Consumer Preview is only available in English, Chinese, French, German and Japanese, while other langauges will have to wait until the operating system is released.

It looks unattractive, and if the pattern follows, 8 will be like Milenium (sp) and Vista. I’ll stick with 7 for now.