AMD revealed back in July that the first Fusion APU will launch in Q4. The first will be the mobile Ontario circuit, whose theoretic performance is said to have been revealed by the BOINC project, and it hints of the performance we can expect.

Ontario builds on the AMD Bobcat architecture and will bring integrated DirectX 11 graphics optimized for mobile and energy efficient platforms. The Bobcat architecture will according to AMD be capable of TDPs lower than 1 watt, but the level AMD is aiming for with the first Ontario models is uncertain. 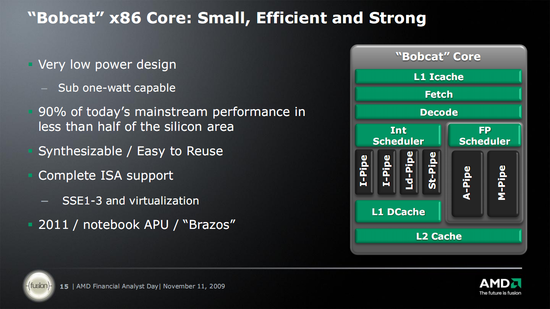 There is still no concrete information on the power consumption of Ontario and these benchmarks are still unconfirmed, but Ontario could become a real interesting notebook alternative with its relatively powerful DirectX 11 graphics portion, but also for HTPCs and multimedia PCs where Intel Atom has found a niche.