OCZ will present the fruits of the cooperation with controller manufacturer SandForce during CES next week. Already we have all the goodies and details served on a silver platter by Anandtech. OCZ have shipped a prototype of the first SandForce solid State Drive called Vertex 2 Pro, which is faster than all other MLC-based units on the market.

OCZ have equipped its Vertex 2 Pro drive with SandForce entry level controller, SF-1200, but the final version of the drive is expected to use the even more powerful SF-1500 controller. But with the same firmware as the more advanced SF-1500, Vertex 2 Pro is still very fast and those who are searching for high random read/write speed the SandForce drive is a monster.

It performs 50.9MB/s at random write of 4KB files, which is more than 25% faster than the leading Intel G2 series that masters around 40MB/s or for that matter the meager 13.6MB/s the precursor Vertex Turbo can do.

According to Anandtech, OCZ and SandForce have done a great job with the prototype as it shined throughout the benchmarks and with its SSD controller it takes SSD storage to another level. 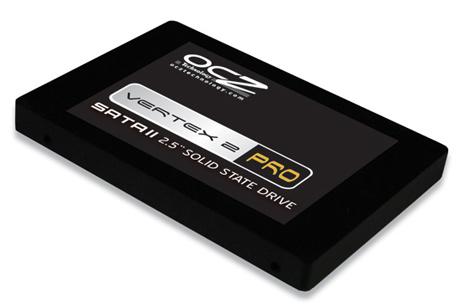 With internal data compression it can achieve read and write speed up to 260MB/s and the only problem with this technology is that already compressed files (MP3, H.264, RAR, etc.) will not reach the same pleasant speeds when they are moved around on the drive.

OCZ Vertex 2 Pro is still the fastest MLC-based drive we have seen, but unfortunately it won’t appear until March and cost a pretty penny. It’s good start for 2010 either way.