Piledriver up to 20 percent faster than Bulldozer?

Hem Nyheter Piledriver up to 20 percent faster than Bulldozer?

AMD’s coming Trinity processors is not far off now, and more benchmarks have reached the surface. Trinity builds on a new graphics processor and the new Piledriver cores, evolved from Bulldozer.

Details on AMD’s coming products are rare, but AMD is having some trouble keeping everything to itself when it comes to Trinity, the successor to the Llano family in the A series. Well known enthusiast Dresdenboy has compiled a table that compares AMD Trinity with its Piledriver cores, to Bulldozer, Stars and Intel Nehalem and Sandy Bridge. The floating point performance (FP) is based on Whetstone, while the integer benchmarks (Int) is Dhrystone. 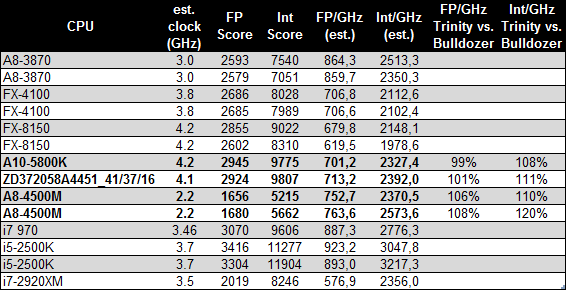 A10-5800K and an engineering sample ZD372058A4451 that looks to bring about the same floating point performance as Bulldozer at the same frequency. When it comes to integer performance we see a boost of around ten percent. The clock frequencies of A8-4500M is estimated to 2.2 GHz, but this is unconfirmed and might as well be the Turbo mode. This could explain why the performance difference is so big at the same frequency, up to twenty percent better than Bulldozer. 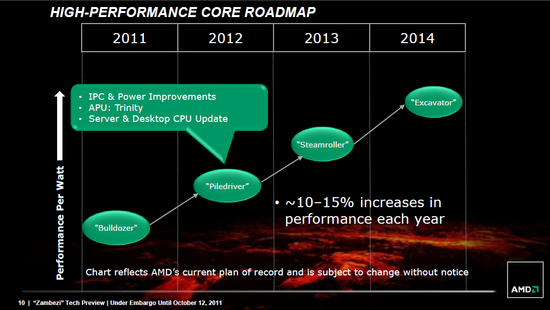 Will Piledriver become what Bulldozer should have been?

Besides performance boosts Piledriver is expected to be more efficient and handle higher clock frequencies than Bulldozer, which means there might be more to this than the charts can display. We should keep in mind all results have been gathered from BOINC, which is a very inconsistent program, so the numbers could be both better or worse than mentinoed above. We therefore recommend our readers to take this information with a big chunk of salt.