Sandy Bridge has shown great potential in the first benchmarks, but the questions surrounding Intel’s work with overclockers and enthusiasts have been many. During IDF Intel confirmed limitations with overclocking the bus, but at the same time showed an unlocked Sandy Bridge CPU overclocked to 4.9 GHz.

Intel hasn’t spoken much about the overclocking of the new architecture and one of the reasons is that the new architecture handles the BCLK bus differently. The BCLK clock generation is now found in Intel’s chipsets and is there to regulate theclock frequency for the processor bus but also other components in the system, including USB and PCI Express controller.

The locked BCLK clock generator can therefore not be manipulated for only increasing the processor bus it will also affect the clock frequency of other components. This was confirmed during IDF2010. 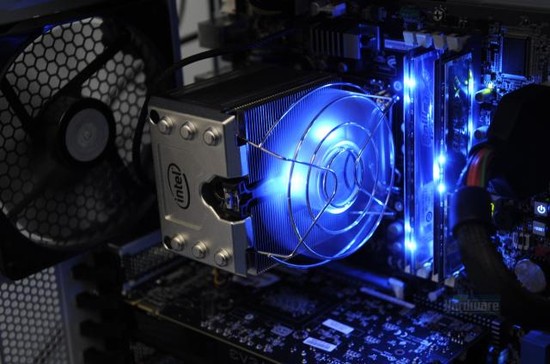 To soften the blow it showed one of its unlocked K models overclocked to 4.9 GHz with a regular reference cooler. A model that looks like the Extreme Edition cooler Intel launched last year. Exactly which CPU that was used was not revealed, but most likely it is the top model Intel Core i7 2600K with a stock frequency of 3.4 GHz.

To show that the system was stable it ran the CPU benchmark Cinebench 11.5 and claimed that it only had to do a minor voltage increase to get it stable. There were no results shown or details on what kind of voltages it used.

Intel will not be giving up the enthusiast market with Sandy Bridge, but it will be limited to unlocked  K models. We’re still unsure on how the new mid-range platform will affect us, the users that are accustomed to having full control over our systems.