Gigabyte launches the world's lightest notebook on May 31 - X11

Gigabyte is one of the world’s largest motherboard manufacturers and even though the company has quite a product range of laptops there is no product category that is prioritized. However this might be changing since the company now prepares to launch ”the world’s lightest notebook”.

In a press invitation Gigabyte spins further with their big promise and writes that they have conquered the 6th element. Exactly what this means is not revealed by the invitation, but keeping in mind that we see some sort of crystals in the picture and that Gigabyte is talking about the world’s lightest notebook, it is probably the manufacturing material they refer to.

Gigabyte will according to Engadget name the computer X11 and, if we are going to go on pure probability theory, this means that the computer is an ultrabook in the 11,6 inch format and weighing well below 1 kg (~2,2 lbs), where many competitors today comes in at approximately 1,1 kg (2,42 lbs) or more. 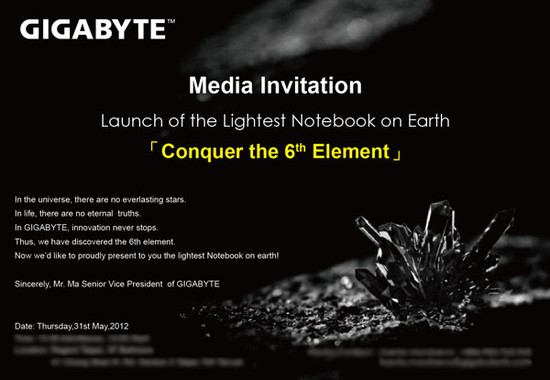 Which 6th element that Gigabyte now has come up with remains to be seen. However on May 31, the official announcement is to be made, and we keep our fingers crossed that Gigabyte’s reentry on the notebook market not weighs too lightly in the heavy competition.