AMD present memory kit with focus on graphics and RAMDisk

As a relatively new actor in the memory business AMD has focused on system memory for enthusiasts, but the reception has been lukewarm. The company has announced the new memory kit RG2133, which offers high clock frequency and RAMDisk profiling.

As the name implies, RG2133, these are modules operating at 2,133 MHz and part of the AMD Radeon Gaming Series. The kit consists of four 4GB DDR3 DIMM modules, adding up to 16 GB in total. The modules are set to work at 1.65 V, and with the high frequency comes high timings at 10-11-11-20. The modules also support AMD Memory Profile (AMP) and Intel eXtreme Memory Profile (XMP). The memories are equipped with low-profile heatspreaders, and should be nowhere near conflicting with any of the bigger processor coolers. 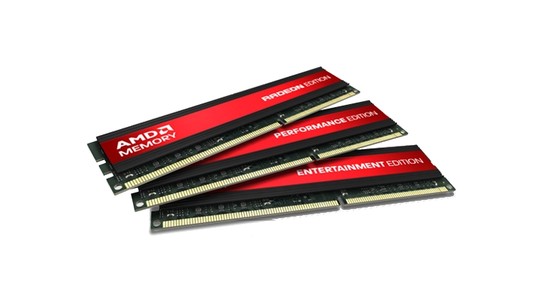 The focus is on enthusiasts looking for modules that can do high frequencies, but the idea is for the kit to give a performance boost as a shared graphics memory for integrated GPUs in AMD desktop APUs. The boost is quite big too, AMD promises up to 22% faster compared to slower modules.

As with previous kits AMD has given free access to its software RAMDisk for building RAM disks. This program allows the user to dedicate a portion of the system memory to create a virtual storage unit of up to 4 GB with extreme transfer speeds. Those who use older models from AMD can use the software for RAM disks to make disks up to 6 GB large, and for 14.99 USD you can acquire a license for RAM disks up to 32 GB.

With the launch of RG2133, AMD has updated its RAMDisk assortment, and there is now the possibility to make disks up to 64 GB in capacity, for those with plenty of memory to spare. At the moment anyone who buys a RG2133 kit gets free access to the 64 GB version of RAMDisk.