On the side of its APUs and graphics cards for retail, AMD has been working hard on its products for servers, where it has now presented the plans for 2014. We get to see a revised Opteron series, HSA for servers and 64-bit ARM processors.

AMD’s battle for retail market shares is somewhat bittersweet, since the company is leading the industry in integrated graphics, but is still behind in raw CPU performance. Despite the chaos surrounding the PC platform AMD has a strong ace up its sleeve; servers, which it hopes to reclaim some of its former glory with a row of new processor with both X86 and ARM under the hood.

First up is an update code-named Warsaw for the current Opteron 6300 series sporting Piledriver cores, made with 32 nanometer technology at Globalfoundries. It is an update along the same line as when Richland replaced Trinity for retail APUs, with the same base architecture, but a series of optimizations for turning up the frequencies and/or lower energy consumption.

Warsaw will be compatible with current G34 socket motherboards and bundled hardware, and the boost in performance is somewhere around 20% better per watt.

Berlin on the other hand feels a lot fresher, building on the retail platform Kaveri, which uses HSA or Heterogeneous System Architecture. This means this is an architecture where CPU and GPU can effectively share the workload, not the least thanks to HUMA, Heterogeneous Unified Memory Access, which allows both processors to read and write to a common memory pool, which in turn makes the platform easier to code for.

Specifications vary a lot between Kaveri and Berlin. The latter uses four cores with the newer Steamroller architecture, which is paired with a graphics circuit based on Graphics Core Next, at the moment uncertain exactly which one, and here TSMC makes the chips with its 28 nanometer process.

There is 4 MB L2 cache, 2 MB per pair of cores, support for four DDR3 memory modules and memory bandwidth up to 1,866 Gigatransfers per second. Here it promises up to eight times better efficiency than current top model Opteron 6386SE.

We also got a glimpse of Seattle that is interesting in so many ways. Instead of building on a retail processor AMD has built a new 64-bit ARM processor with 8 or 16 Cortex-A57 cores. Seattle marks a major motion toward the ARM platform for AMD, but also marks that ARM is starting to gain some momentum and could threaten X86 for servers in some segment. This is a market where the lack of 64-bit support has been holding it back.

Seattle is built specifically for servers and will be considerably more optimized than its X86 based relatives. The processors comes with encryption and compression technologies for off-loading these tasks, and AMD promises up to 4 better performance than the X86-based Opteron X processors and their Jaguar cores.

So far AMD’s venture with ARM is limited to servers and business markets, but if the architecture gets a foothold in computers it is not impossible that AMD will take the opportunity to make ARM processors for retail. So far X86 is the main contender and AMD will be an interesting company to follow in the future, with one foot in either camp. 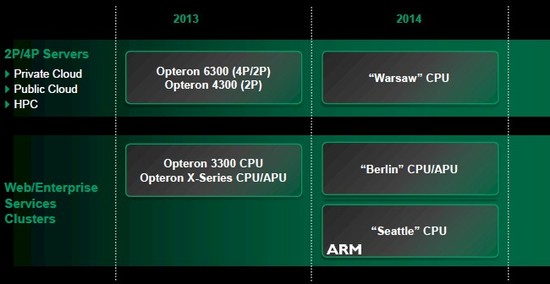 Both Warsaw and Berlin will launch in H1 2014, while Seattle will show up in H2.