AMD is expected to announce Trinity in Q2, the successor to the successful Llano APU; a processor with integrated graphics. One of the first mobile circuits has now appeared in a computer from HP; Pavilion G4-2002AX.

AMD Trinity is the next generation APU that will sport the new Piledriver architecture, which is an evolution of Bulldozer. Trinity will sport either two or four cores, depending on if it ships with one or two Piledriver modules. The graphics architecture is also new, and builds on the VLIW4 architecture found in Cayman and the Radeon HD 6900 series. 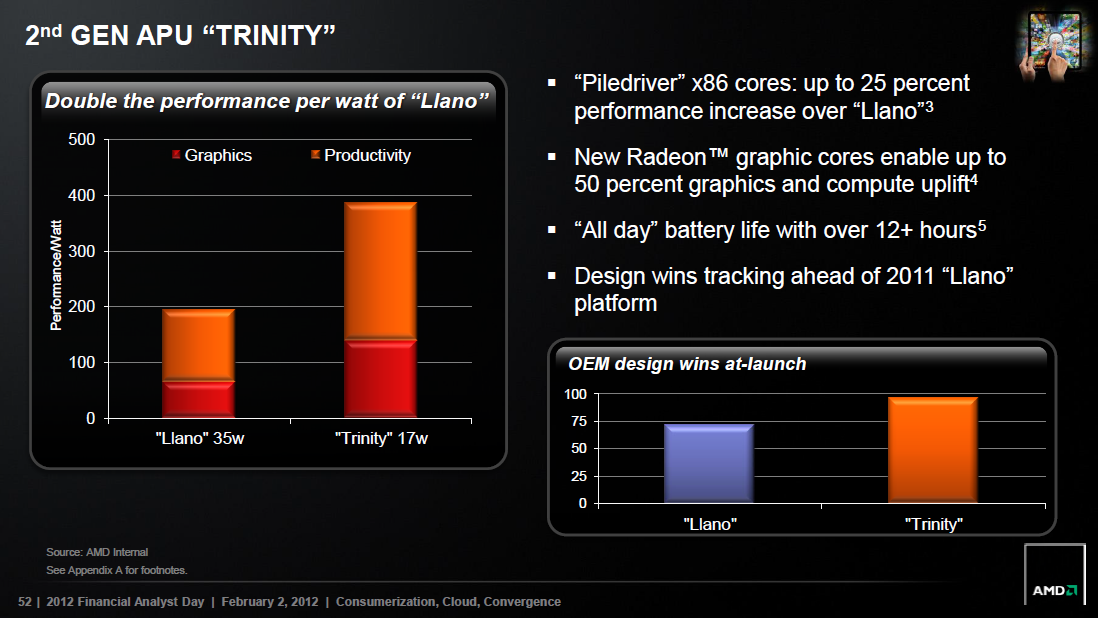 AMD promises double the efficiency with Trinity compared to Llano

Today we see one of the first mobile models based on Trinity listed in a computer from HP. AMD A6-4400M sports two cores clocked at 2.6 GHz, with a Turbo mode at 3.0 GHz. The graphics will be Radeon HD 7520G, which most likely sports three VLIW4 clusters for a total of 192 Radeon cores. The specifications also lists Radeon HD 7670M with 1 GB dedicated memory to work with the integrated graphics in Dual Graphics mode. Considering de the results we got with Dual Graphics, we are wondering what the result will be when AMD mizes two different graphics architectures?

When compared to AMD’s currently fastest APU with two cores the specifications looks promising in relation to the TDP. The question remains if the Piledriver architecture can deliver, and not the least what frequency the graphics is clocked at? We hope to see more details on the APUs in the A8 and A10 series with more powerful processors and graphics for notebooks soon.