Llano was the product AMD needed in the lower segment and notebooks. New leaks suggests that Trinity not surprisingly will get a lift in both processor and graphics performance over Llano. Trinity also supports DDR3-2133.

Trinity comes with second generation Bulldozer cores called Piledriver, and will be the first product to use this architecture. Since Piledriver, like Bulldozer uses a CMT-based design, Trinity will be equipped with two to four cores and up to 4 MB L2 cache. Processor performance will be 20% over Llano, which is a welcomed addition since it is the achilles heal of the Llano and A series APUs.

Also the graphics gets a list, where performance will be 30% over Llano. The graphics will be based on the not yet launched HD 7000 series and gets a VLIW4-based architecture like the one in Cayman and HD 6900. If the next generation DirectX 11 means the rumored DirectX 11.1 or not we don’t knwo at this point. Built-in multimedia functions like SAMU (Secure Asset Management Unit) and VCE (Video Compression Engine) will be present. Trinity will get improved support for EyeFinity and DisplayPort 1.2. 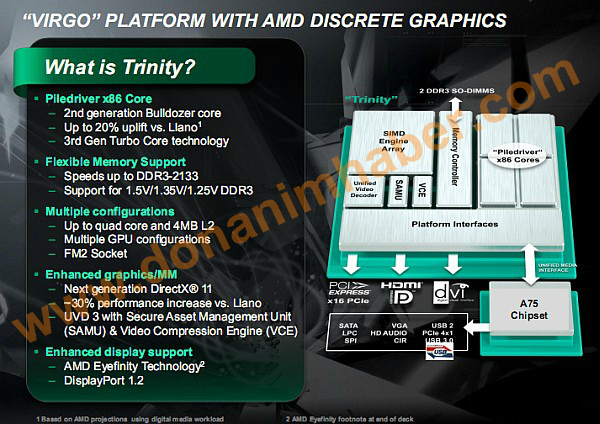 We know since earlier that Llano is not getting all the bandwidth it needs, and since Trinity gets both a more powerful GPU and CPU it supports DDR3-2133. Like Llano it is with two memory channels, but we will have to see what changes has been made to the memory controller. Socket for Trinity will be FM2, and chipset is the same A75 as before, so it looks like Trinity will be compatible with Llano and FM1, but this is nothing we can confirm today.

Trinity is slated for Q1 and looks to impress against Llano. Around this time also Intel will launch Intel Ivy Bridge. While Ivy Bridge is not expected to surpass Trinity in graphics performance, the integrated graphics will be better than Sandy Bridge and comes with lower energy consumption. AMD will still be at 32nm and right now it is not perfect, which means there is room for improvements.

Intel will have transitioned to  22nm with Tri-Gate technology, that is expected to lower energy consumption and improve performance more than any earlier transition. AMD has always been one step behind in this area so this is by no means news, but in the mobile products that Trinity targets Intel could have the upper hand. Whatever the result will be we have two companies coming for the mobile market and they are not stopping for anyone.