AMD's mobile roadmap up till 2013, early launch of Trinity confirmed

We earlier wrote a piece on the successor to AMD Llano, Trinity, that would launch sooner than expected. New images reveal that Trinity will make an entrance in Q1 next year, but also see new information on the mobile roadmap up until 2013. Third generation performance-APU will be called ”Kaveri”, with third generation Bulldozer cores, ”Streamroller”.

AMD launhed Llano by the end of Q2 this year, and broke new ground on the CPU market. The integrated graphics of Llano was on par with discrete graphics cards, and a big part of AMD’s Vision where processor performance is far from everything, and the graphics processor will play a much bigger role during everyday usage.

AMD Llano was product that was supposed to launch in 2010, but was postponed at least 6 months for unknown reasons, but there were talks of poor yields at 32nm. Due to the delay the successor will be very close to follow Llano. We speak from experience when we say that ”Production” often means a launch in one to two months later, which also confirms previous sources. 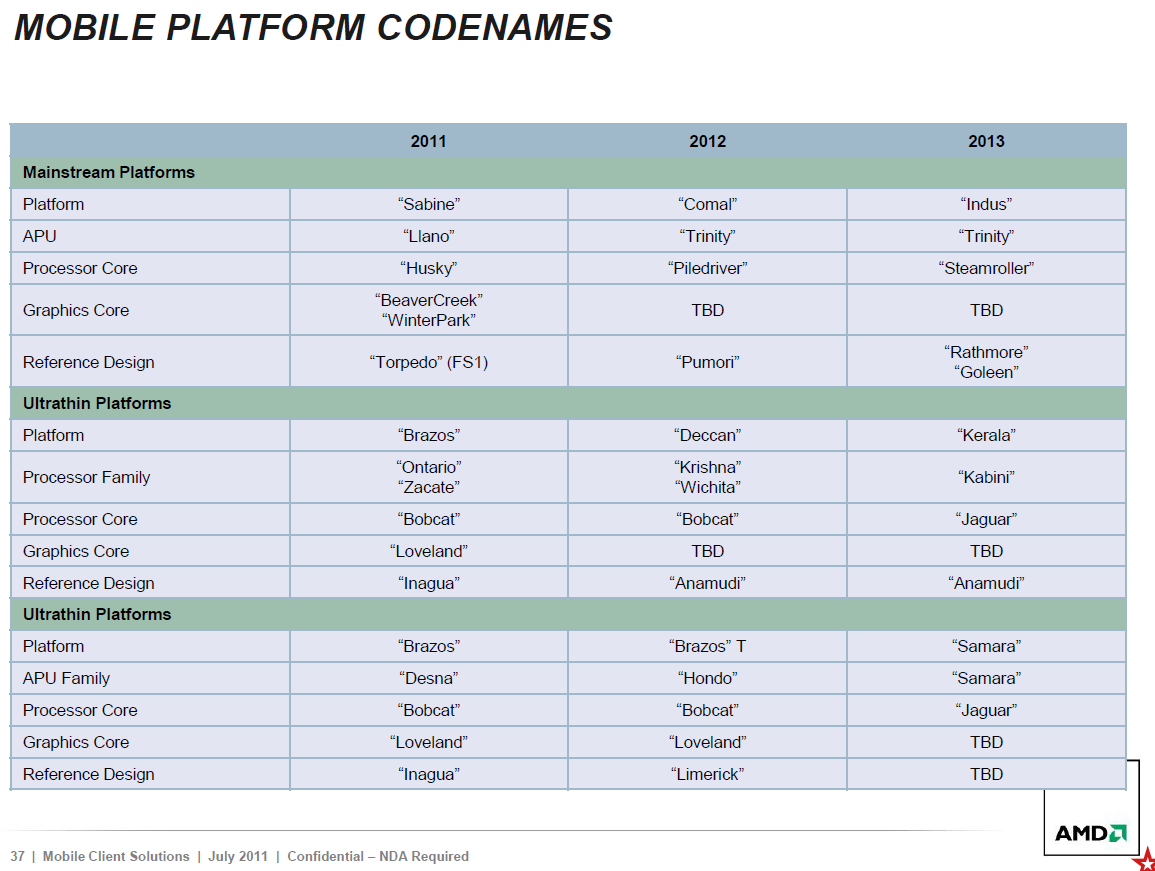 At the same time as these images appeared, roadmaps for 2012 and 2013 followed together with an armada of code names that AMD has helped break down. Amongst them we find platforms for 2013, with today uknown specifications. ”Streamroller” will be the third generation Bulldozer, and the successor to the Bobcat architecture will be called ”Jaguar”. 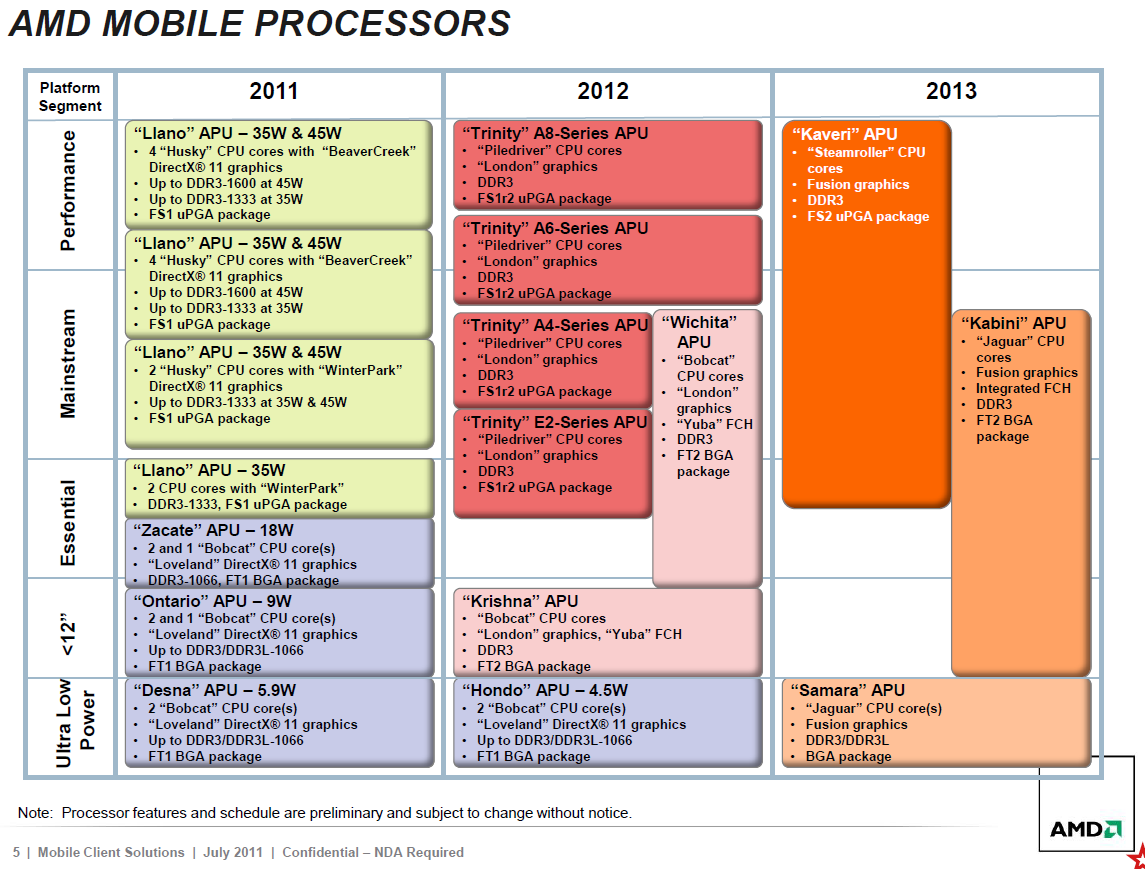 Trinity that will repalce Llano will bring the second generation Bulldozer architecture known as Piledriver, and a GPU called ”London”. The only thing we know about Trinity today is that it will bring four cores and the GPU will be based on a VLIW4 architecture with 50% higher GFLOPS than Llano. Something that not only speaks for good GPGPU performance but also FPS.

Wichita and Krishna has appeared here and there in the news and they will bring four ”improved” Bobcat cores, and integrated southbridge, which makes them a SoC (System-on-a-Chip). An interesting detail is that also these will sport London” graphics, the same VLIW4 architecture found in Trinity, although slower. Hondo that will be used in tablets, is in principle the same circuit as Ontario/Desna seen to performance. It is a reworked circuit with all unnecessary logic removed to fit better with tablets.

Kaveri will replace Trinity in 2013, together with third generation Bulldozer called Steamroller. Kabini and Samara will replace Wichita, Krishna and Hondo as AMD’s ultramobile platforms and bring a new core called Jaguar. The only thing we know about Jaguar is that it will replace the Bobcat architecture. 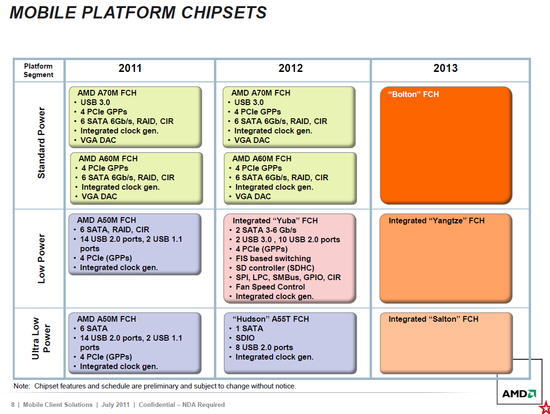 AMD chipsets A70M and A60M will stay put with Trinity, but with SATA 6.0 Gb/s and USB 3.0 included we see very little need for a hasty upgrade.

The chipset Yuba that is found inside Wichita and Krishna will sport two SATA 3.0 – 6.0 GB/s ports, two USB 3.0 and further integration of functions as SD controller for support of various memory cards. Hudson A55T that will be used with Hondo, is really the same as A50M. But once again it will only sport what is necessary for tablets, and not much more.

The chipsets for 2013 are listed, but without details there is not much to be certain about here. Bolton will be used with Kaveri, Yangze with Kabini and finally Salton with Samara. 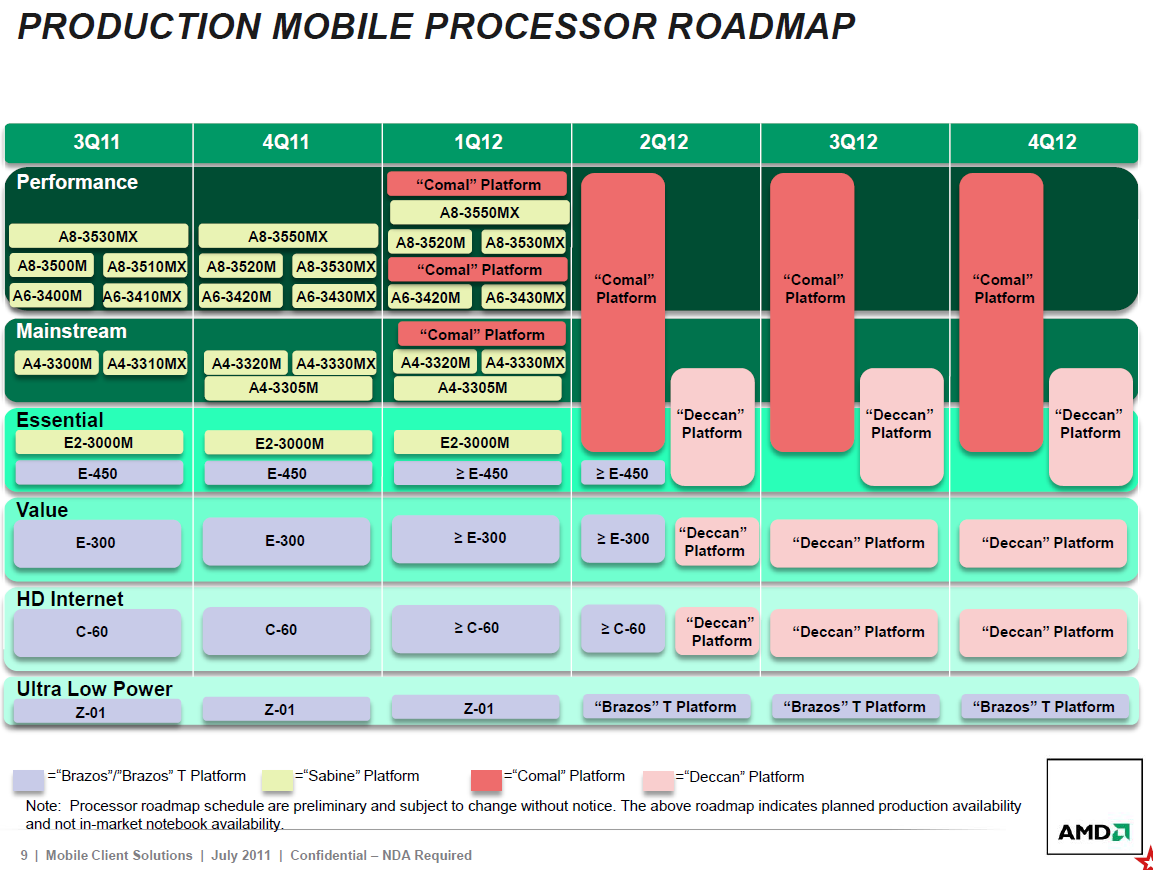 We round off with how AMD positions its products for 2012. During Q2 the Comal platform and Trinity will replace Llano, and for the summer the Deccan platform with APUs Krishna and Wichita will launch and replace Brazos, to the major part. The platform Brazos T, with the Hondo APU will launch in Q2 2012. Hondo will most likely launch with Windows 8.