Cheaper SSD from OCZ in 2012 thanks to TLC NAND

The acquisition of Indilinx earlier this year will bear fruit for OCZ next year as it has big plans for the future. Among others it will start shipping SSDs with the cheaper memory type TLC, and increase the presence in the business segment.

OCZ’s latest controller circuit, Indilinx Everest, supports up to 1 TB memory, big performance boosts over previous Indilinx controllers and support for TLC NAND. TLC (Triple-Level Cell) has the advantage of being cheaper than MLC and SLC since it has room for 3-bits of data per memory cell, instead of 2 or 1 like MLC and SLC respectively. The advantage will be that TLC costs about 30 percent less than MLC, but also comes with two great disadvantages. The first is that performance suffers, the second is that durability drops. 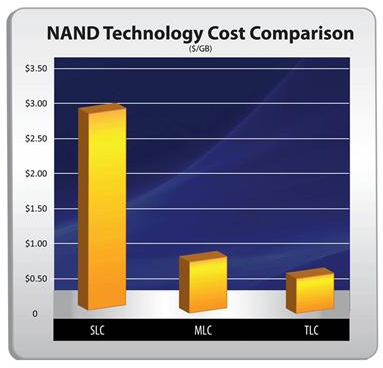 With the sky-high performance we have with current SSDs this factor should not be a major problem. Durability on the other hand is something we have to consider. Many questioned Intel and Micron with its 25nm MLC-NAND since durability would drop to only 5,000 writes per memory cell, but Intel solved this by handpicking circuits and adding a ”special ingredient” to its controllers.

This has resulted in the business solutions Intel SSD 710 that use MLC and has a durability of 60,000 writes. Do keep in mind these writes are worst case scenarios, and in most cases a SSD can do a lot more writes than specified.

OCZ is expected to be the first to launch TLC NAND and the focus will be on OEMs as a cheaper alternative, but also retail. These SSDs will appear in Q1 next year, and we would be surprised if any other controller than Indilinx Everest controller is being used. It will also introduce TLC for businesses, but not until Q3.

It plans to control the drawbacks of TLC NAND through better ECC (Error-Correcting Code) and Indilinx nDurance 2. nDurance 2 is a write pattern technology that will increase the lifespan of the memory cells, but also reduce performance losses as the SSD is filled with data. OCZ says that its TLC-based SSDs will have a lifespan of ”atleast four years”.