DDR3 memories are sold with pretty staggering frequencies and even if we find modules specified to operate at 2500 MHz it is often with very loose latencies. Something Jonas ”Mean Machine” Klar wanted to fix with some liquid nitrogen.

Our overclocking expert and national champion Jonas decided to give Corsair Dominator GTX2 the real treatment and tied three of these modules to an ASUS Rampage III Extreme motherboard. On the heatspreaders of the modules he mounted a K|ngp|n Dominance LN2 pot and turned up the clock frequencies.

The modules are normally specified to operate at 2250 MHz and 8-8-8-24 timings, or 1800 MHz with 6-6-6-18 timings. Jonas aimed for the best of both worlds and landed at a final clock frequancy of 2204 MHz with timings turned down to 6-6-6-18. This was done with three active memory channels and a memory temperature of -80 grader Celsius, even though the memory voltage was ”only” 2.0V. 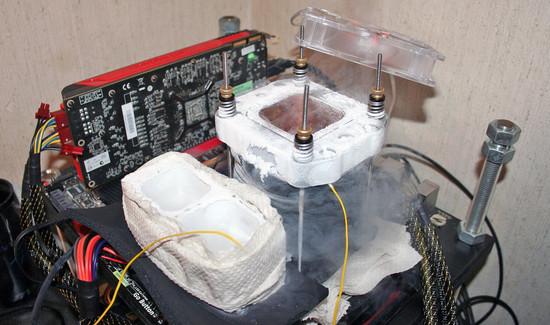 Jonas is now trying to go for the highest frequency and the goal is at least 3000 MHz.