Silicon Graphics Inc has spent a lot of money on expanding its GPU server park and interested in NVIDIA’s latest Fermi architecture, which according to Nvidia, is built from the ground and up for generic computing, I.e. tailored for HPC (high-performance computing), but it has a few downsides according to SGI. In an interview with The Inquirer it opened up for other GPUs since Tesla T20 is simply too hot.

In the same breath of air Bill Mannel, VP of Server Marketing at SGI, says that AMD is starting to become a bigger and bigger threat to Nvidia in GPGPU.

”AMD is catching up very quickly with its ATI graphics chips. ATI’s high end GPGPU cards are only barely nosed out by Nvidia’s Fermi based Tesla boards in some applications. There will be even performance capability between AMD/ATI and Nvidia within the next 18 months.”

With TDPs at 225W, Tesla C2050 and M2050 isn’t just difficult to cool, but also have a greater rate of error, which is related to the heat development. This results in higher costs in the long run and means that companies will have to revise their cooling systems. 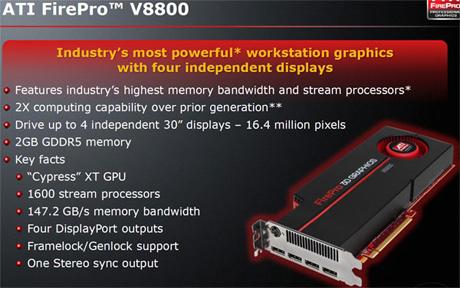 AMD FirePro V8800 based on Cypress

Ironically Nvidia’s focus on CUDA may be damaged by the Fermi architecture and SGI that first considered Nvidia the best alternative  is now leering at AMD, but adds that Intel and Larrabee is still not a realistic alternative. That AMD managed to snatch CUDA architect Manju Hegde from Nvidia hasn’t exactly worsened the potential of future GPGPU solutions.