Gigabyte GTX 580 Super Overclock is getting ready and as late as last week we could reveal the launch was slated for late April. Gigabyte has now released the specifications for the new monster card at its website. As expected we will be offered some seriously turned up frequencies where the GPU does 855 MHz from factory.

The biggest problem with NVIDIA’s GF110 GPU is the enormous heat coming off it during loads. This happens already at the stock freqencies that NVIDIA set to 772 MHz. Gigabyte has set the bar up much higher with the new Super Overclock version of GeForce GTX 580. The GPU is pushed to 855 MHz, while the shaders land at 1710 MHz, and the memory is set to work at 4100 MHz (4008 MHz standard). 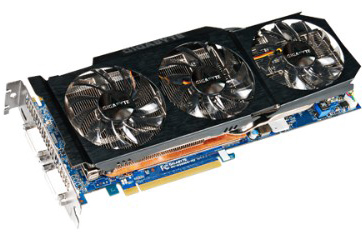 To make this possible Gigabyte has designed its own PCB and added extra copper for better stability and cooling. Proadlizer and solid state capacitors share space with powerful MOSFETs in the beefy power supply with 14 phases.

The price is unknown, but it should appear in just a week or so.