Graphene processors on the market in 2022

Hem Nyheter Graphene processors on the market in 2022

Graphene is predicted to become many things, including a successor to silicon when making microprocessor and logic circuits. Graphene have many advantages compared to silicon and transistors where able to reach 155 GHz clock frequency the first microprocessor prototypes will be ready in 2015, to be commercially available in 2012.

As with all technology the roadmap is very rough, if anything, but in an interview with NextBigFuture Bhagawan Sahu, at University of Texas i Austin, have stated that in 2015 we could see the first prototypes of graphene microprocessors. This would be a great leap for the new material.

In the interview Bhagawan Sahu mentions that silicon transistors will run into more problems as we reach 7nm technology, something Intel has given hints of. After that Dr. Sahu sees no advantages of using silicon for making CMOS transistors and that Intel should start using either germanium or graphene, or possibly something else.

Graphene will have no problem with reaching 7nm or even smaller sizes. Graphene by itself is only one atom thick, which in theory enables transistors at 0.5 nanometer, technology that could be available in GHz circuits in 2022.

”The industry would like to see a prototype by 2015. This prototype would then be taken to corporate R&D labs, and hopefully by 2022 the first commercially available graphene microprocessors could emerge. This microprocessor could be low power but still have many billion transistors and operate in an ultrafast regime.” commented Bhagawan Sahu.

Graphene transistors have already reached 155 GHz in simple logic, which is superior to any silicon transistor measuring raw electron flow. The perhaps biggest problem is making grapene transistors digital. They hav a hard time shutting off entirely, which is critical in a system that builds on ones and zeros, but progress is being made every day. 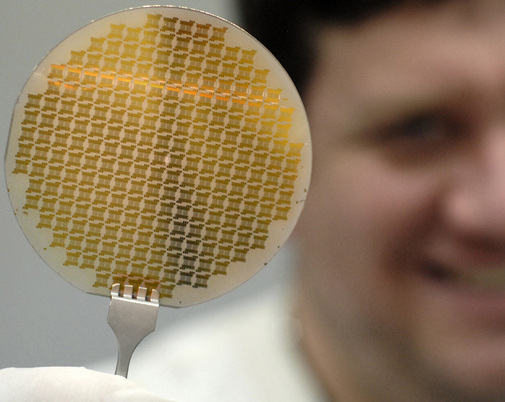 Older graphene wafer at only 100mm

Together with graphene’s many many other uses generally, spider silk, 3D printing, a Quadrinternet (Internet of [Higher Function] Hubs, Internet of Servers, Internet of People and Internet of Things), the current movement to put all aspects of early learning to music, the idea of a WOPPACCO (WOrldwide Pyramid PArliament-Court-COrporation), 1983 arrival of the New Green Energy, possibility of a Second Downpouring of Light (the last was in the 1960s), current Endtime (Time of the End, End of Time), etc., etc.; we seem assuredly destined to live in interesting times.