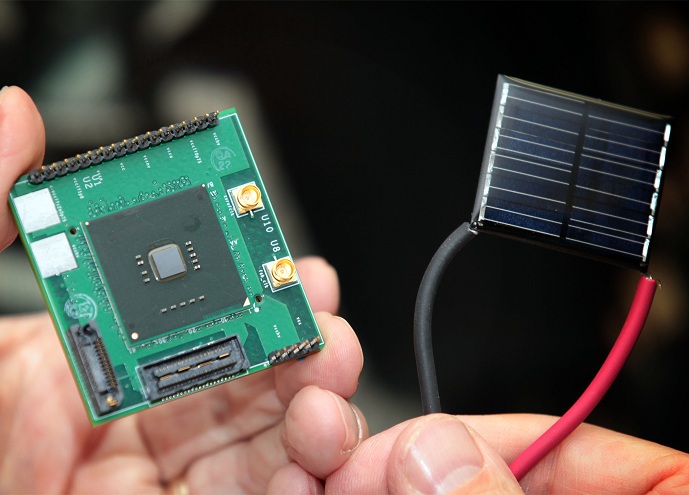 Intel demoed its Near Threshold Voltage-teknik (NTV) during IDF, where it powered a processor with a sun cell the size of a stamp. During ISSCC Intel showed an extension of the technology that can scale down to only 280 mV (0.28 V).

Intel Claremont that was shown at IDF is no performance monster or retail product, but like Rosepoint it is a concept processor. Both technologies is intended to appear in future processors and especially the NTV technology is extra interesting.

The NTV technology enables Intel to power transistors with the least possible voltage and still change between ON and OFF (0 and 1) reliably. Thus the name ”Threshold”. Intel has revealed more details surrounding Claremont, and the results are the least to say astonishing. 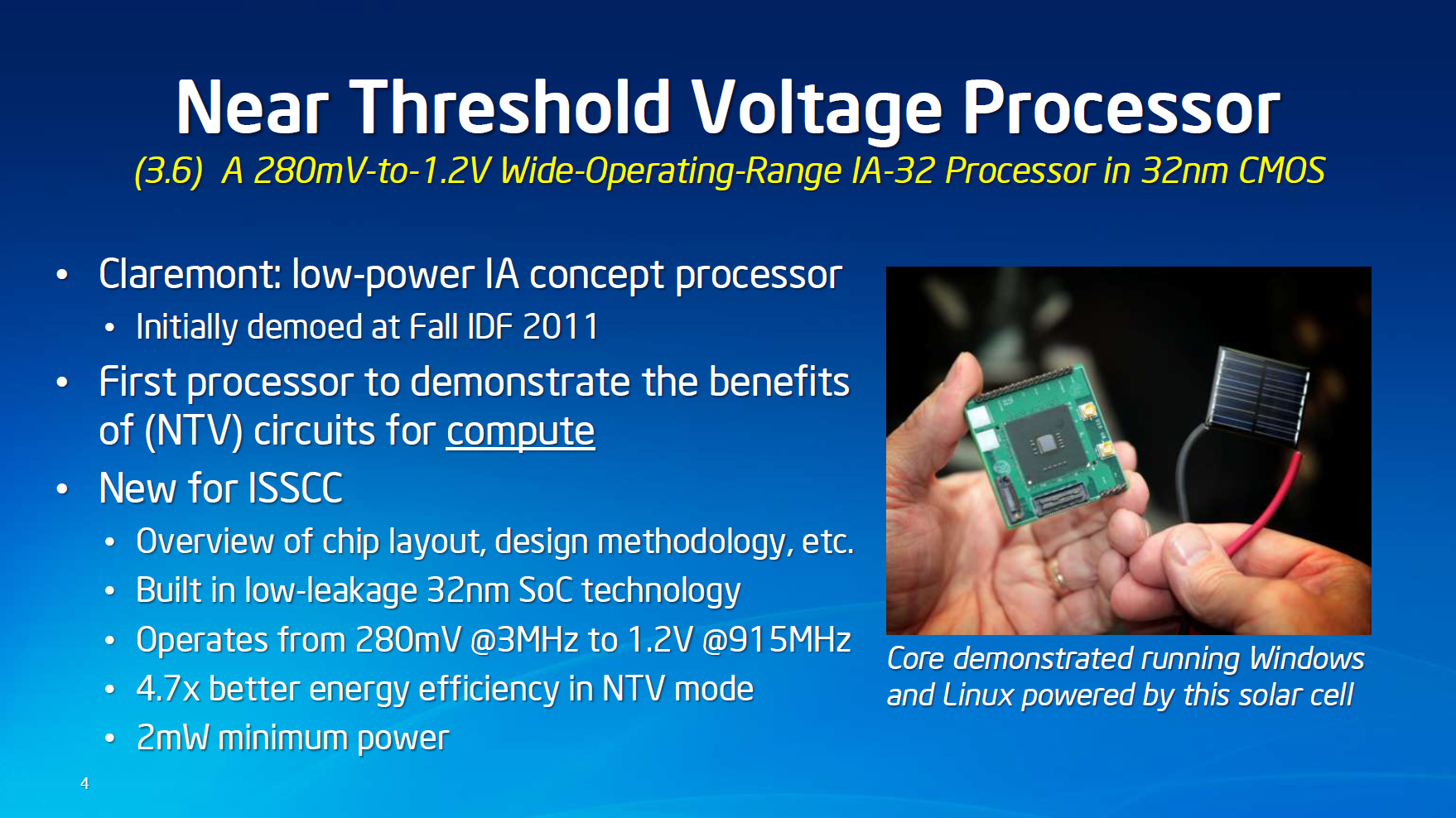 There was talk during IDF about a voltage of 400 – 500 millivolt (0.4 – 0.5 volt), but in reality it can go as low as 280 (0.28 volt). At this record-low votlage the processor will operate at 3 MHz and consume as little as 2 milliwatt – 0.002 watt. The processor is in the Pentium class and can scale up to 1.2 volt and 915 MHz. The idea is to run with such a low voltage and frequency to have enough performance to power all background applications when a unit is idle.

Intel has also presented a flexible floating point unit (FPU) that can switch between 24-bit, 12-bit and 6-bit. In current processors a floating point unit alwys runs in a so called worst-case-scenario, but automatically scaling down itself will mean savings up to 50 percent says Intel. Using NTV technology the efficiency will go up egen further, almost seven-fold. 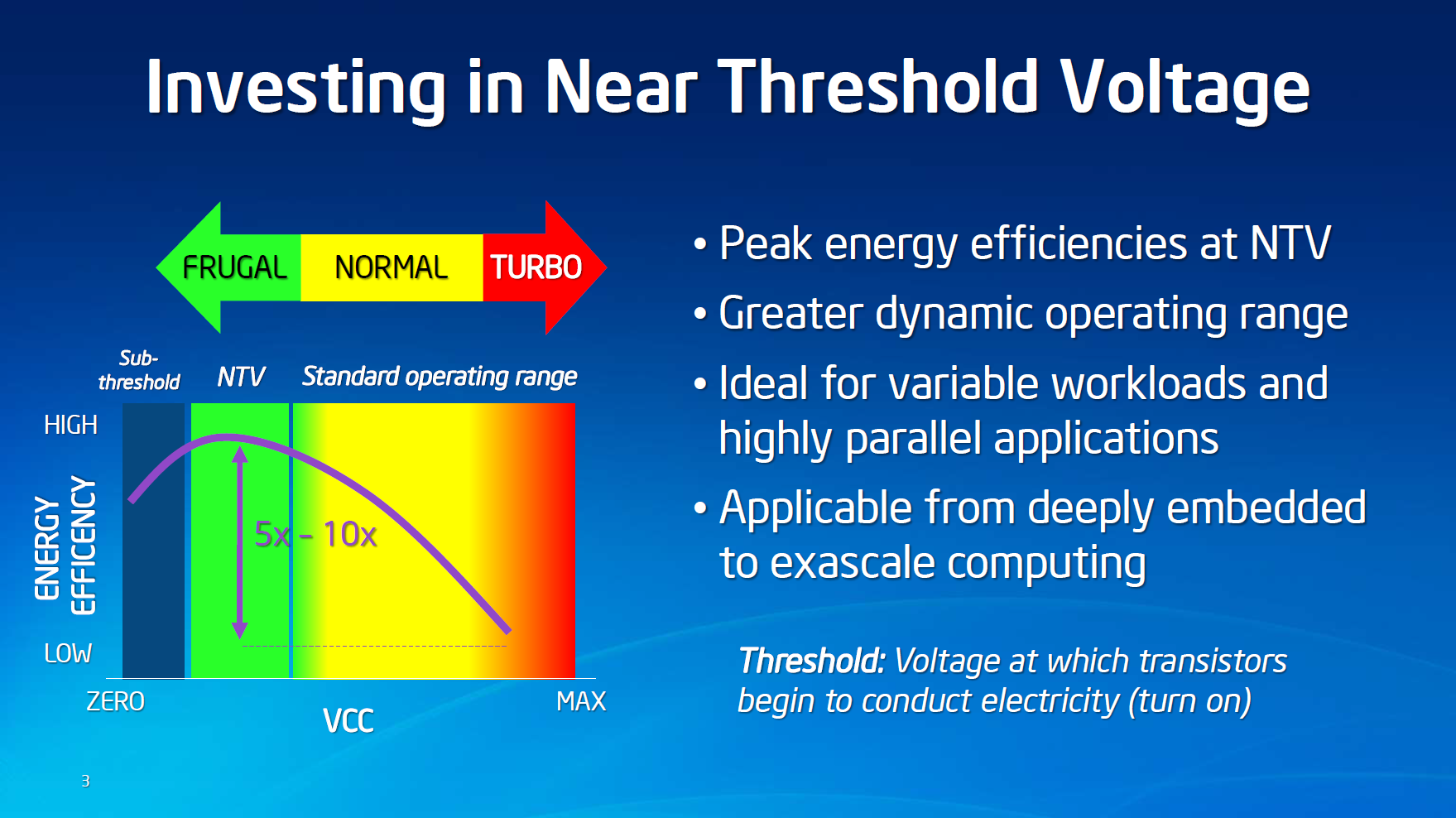 All of the above is based on the 32 nanometer node. The company has already started experimenting with NTV at 22 nanometer. There are no results to show yet, but the technology is said to work just as good at this node. This technology, like integrated WiFi, is a few years into the future. If Intel can deliver to retail products we can expect huge energy savings – and thus longer battery times. Intel hopes to use the NTV technology throughout its lineup in the future.