Intel has already tried to grab a slice of the mobile chip market, but with the Silvermont architecture Intel wants more than just a slice. Intel promises to deliver everything you may wish for in its new Atom processor; the first Atom architecture developed directly for mobile products.

Silvermont is Intel’s first big upgrade of the Atom architecture since the Bonnell core was released in 2008. The current mobile Atom chips, using the Medfield, Clover Trail and Clover Trail+ architectures, have become more of a budget alternative for low-end PCs rather than mobile phone competitors. 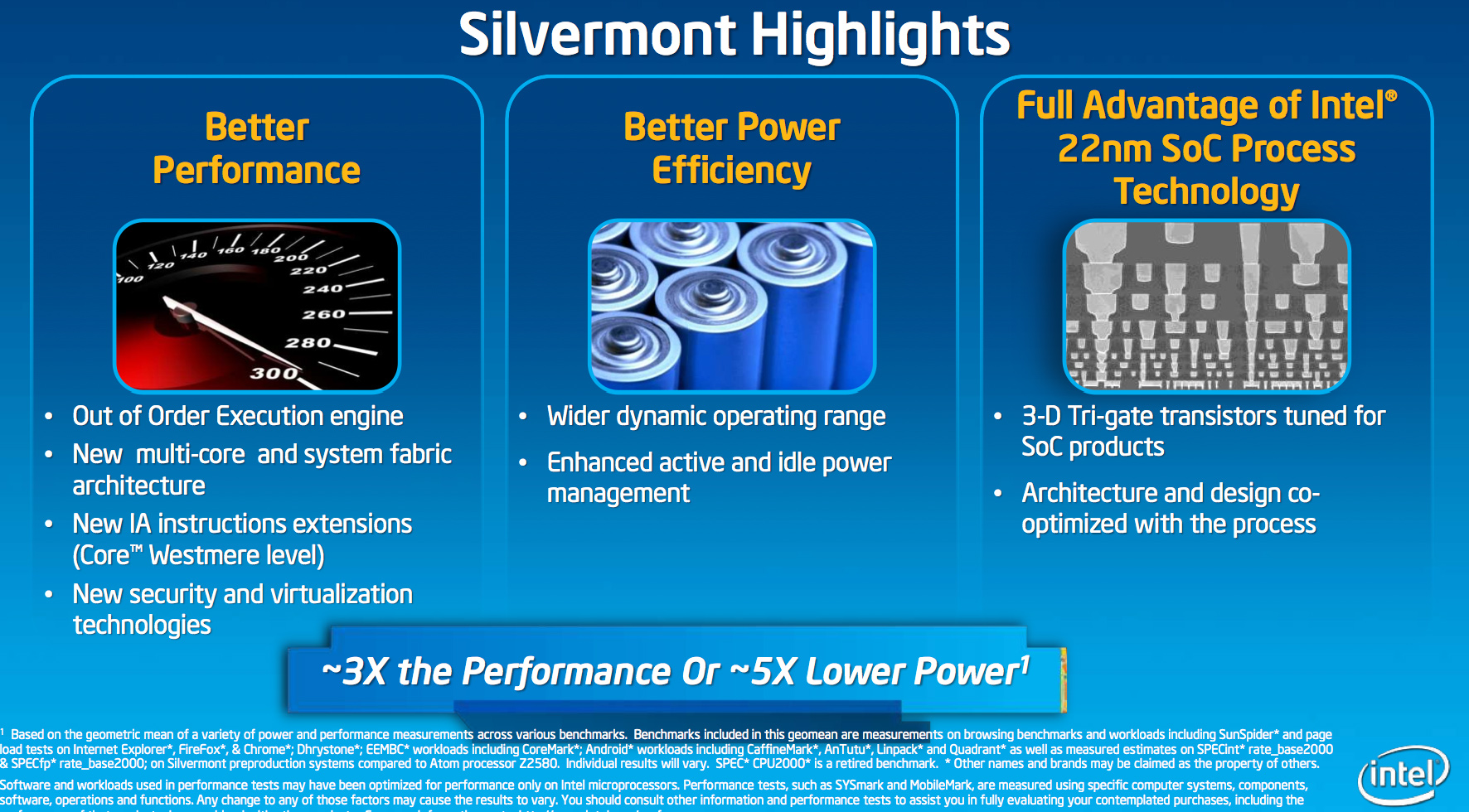 Silvermont is all for the mobile market and it is all thanks to a new base architecture that upgrades Atom from a simple in-order architecture to a more complex, but als more performance efficient out-of-order architecture. Just the fact that it will transition to an OoO architecture, also used by e.g. ARM Cortex-A15, should bring a performance boost of cirka 30 percent in single-threaded applications, compared to the older Bonnell core. 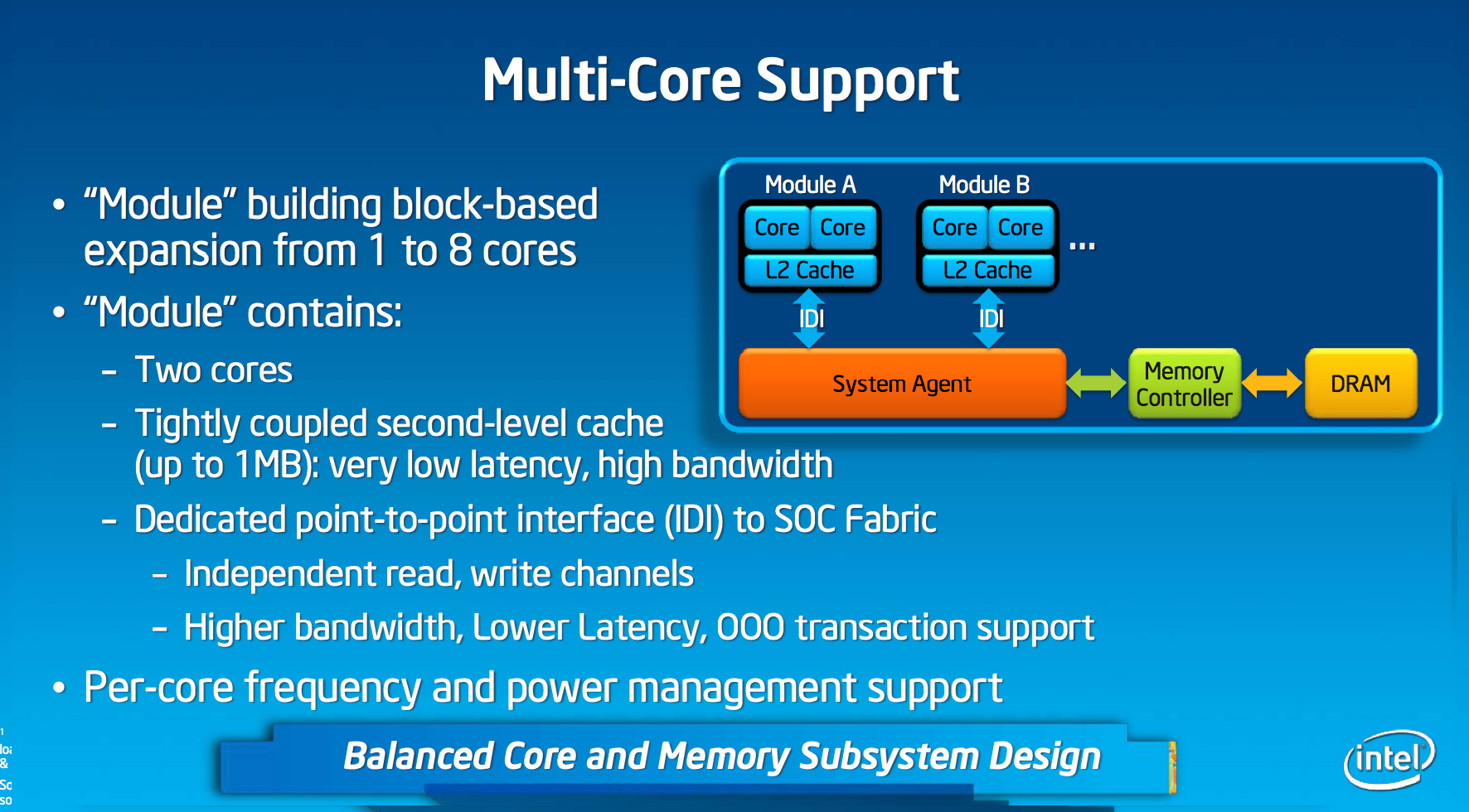 Besides that, Intel has redesigned the pipeline of the Atom core, ditched Hyperthreading and thrown out the classic Front Side Bus and replaced it with a dedicated interfaced dubbed IDI. We also get more L2 cache and Intel’s first processor architecture to implement individual clock frequencies for each core. This is something Qualcomm has used successfully with its Snapdragon processors and Intel has been reluctant to try before this. 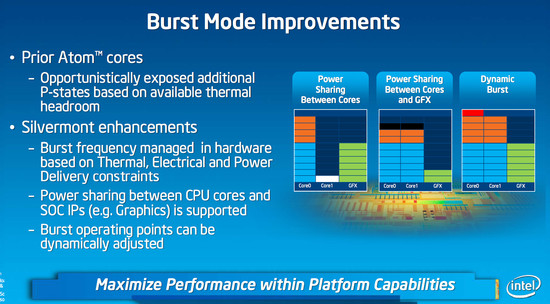 All in all Intel’s new base architecture will bring performance boosts of up to 50% at the same frequency in single-threaded applications, but according to Intel there are more goodies to enjoy with the final products.

Silvermont will also be the first Intel processor to be made with a new and more flexible version of the 3D transistor FinFET, which was originally introduced with the Ivy Bridge architecture. Ivy Bridge was made with Intel’s P1270 22 nanometer technology, Silvermont will be made with a revised technology called P1271. They are still 22 nanometer 3D transistors, but with these Intel has decided to focus on less leakage, which will reduce frequency potential, but improve energy efficiency and will overall suit the intended market better.

Looking at what Intel promises in terms of improvements there is little to complain about. According to Intel’s own performance evaluations Silvermont should be between 2 to 2.8 times faster than current dayAtom Saltwell processorrs by the end of the year. At the same time Silvermont will be 4.4 to 4.7 times more efficient at the same level of performance. 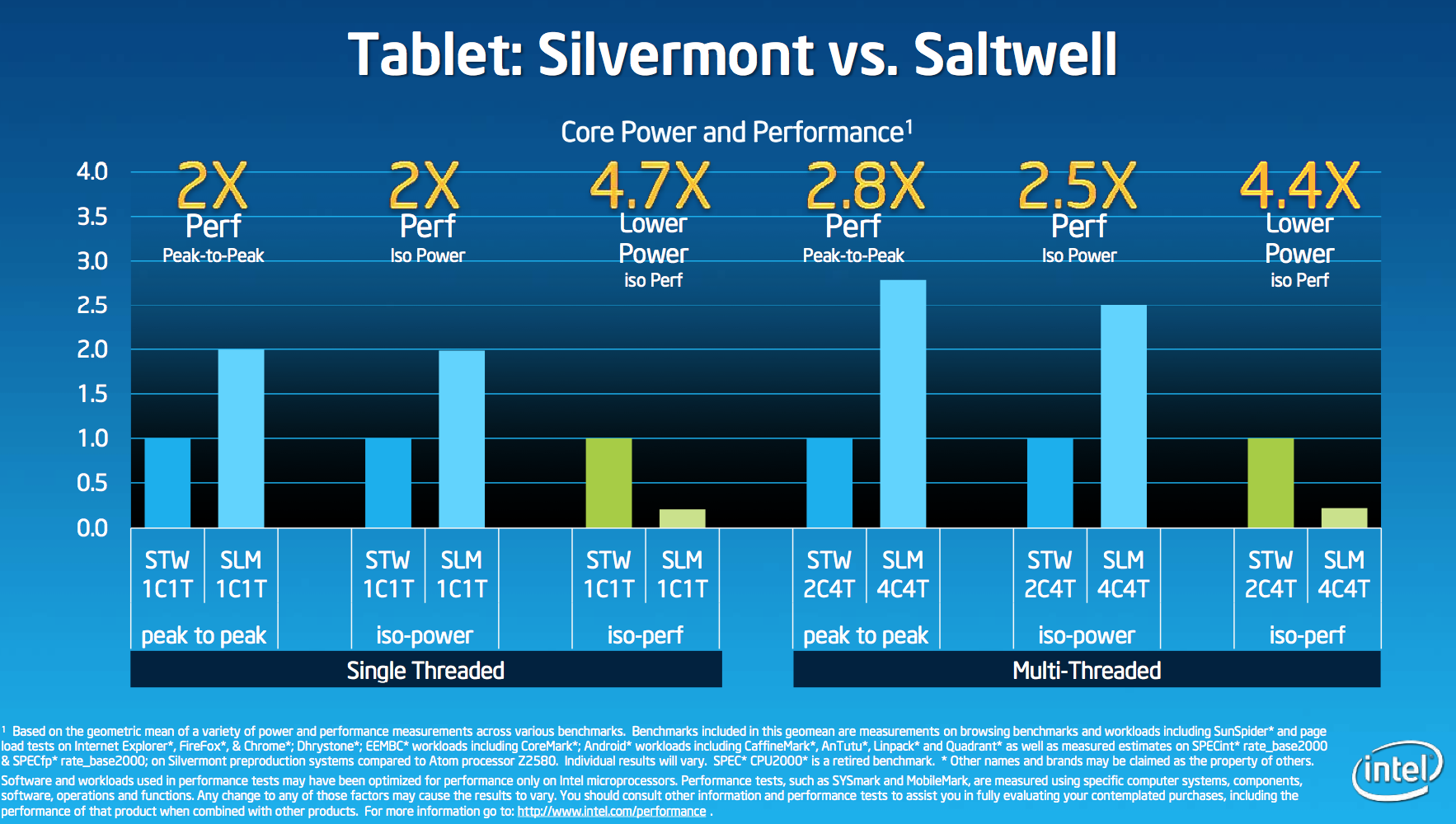 The comparison becomes even more interesting when Intel add competing system processors to the mix. It doesn’t really say which circuits it is, but since they are quad-core ARM processors we are most likely looking at ARM Cortex-A9, Cortex-A15 and Krait. This is not confirmed by Intel though. A dual-core Silvermont CPU delivers 1.4 to 2.1 times better performance than these quad-core processors according to Intel. At the same level of performance it will consume 1.6 to 3.1 times less power. 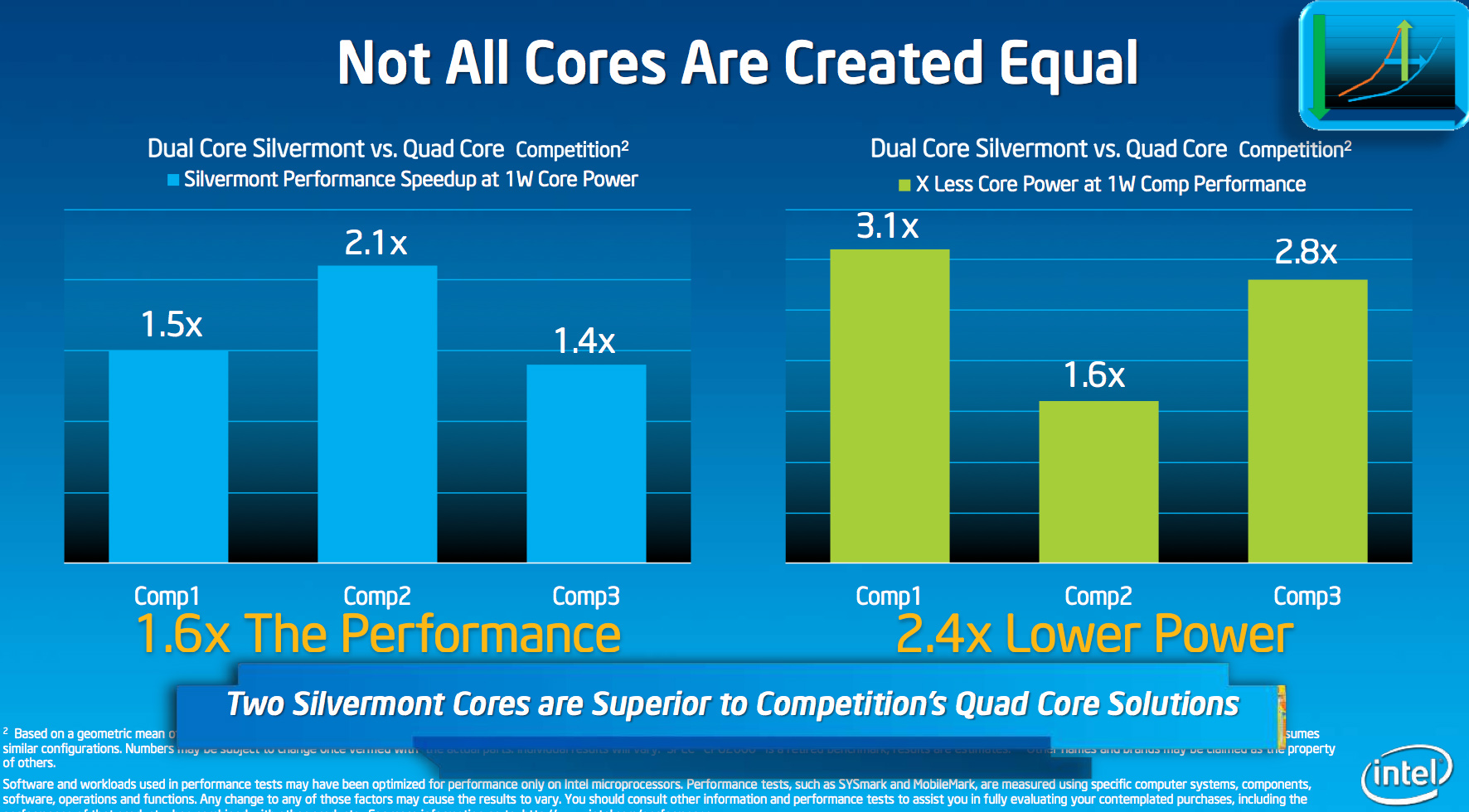 Doubling the number of cores in Silvermont the distance to the competition increase even more and here another quad-core model shows up on the chart. This is probably a quad-core Apple Swift SoC and the results are truly in Intel’s favor. Performance is 1.6 to 2.3 times better at 1.5 W energy consumption while Silvermont delivers the same performance as the competition at 3 to 5.8 times lower energy consumption. 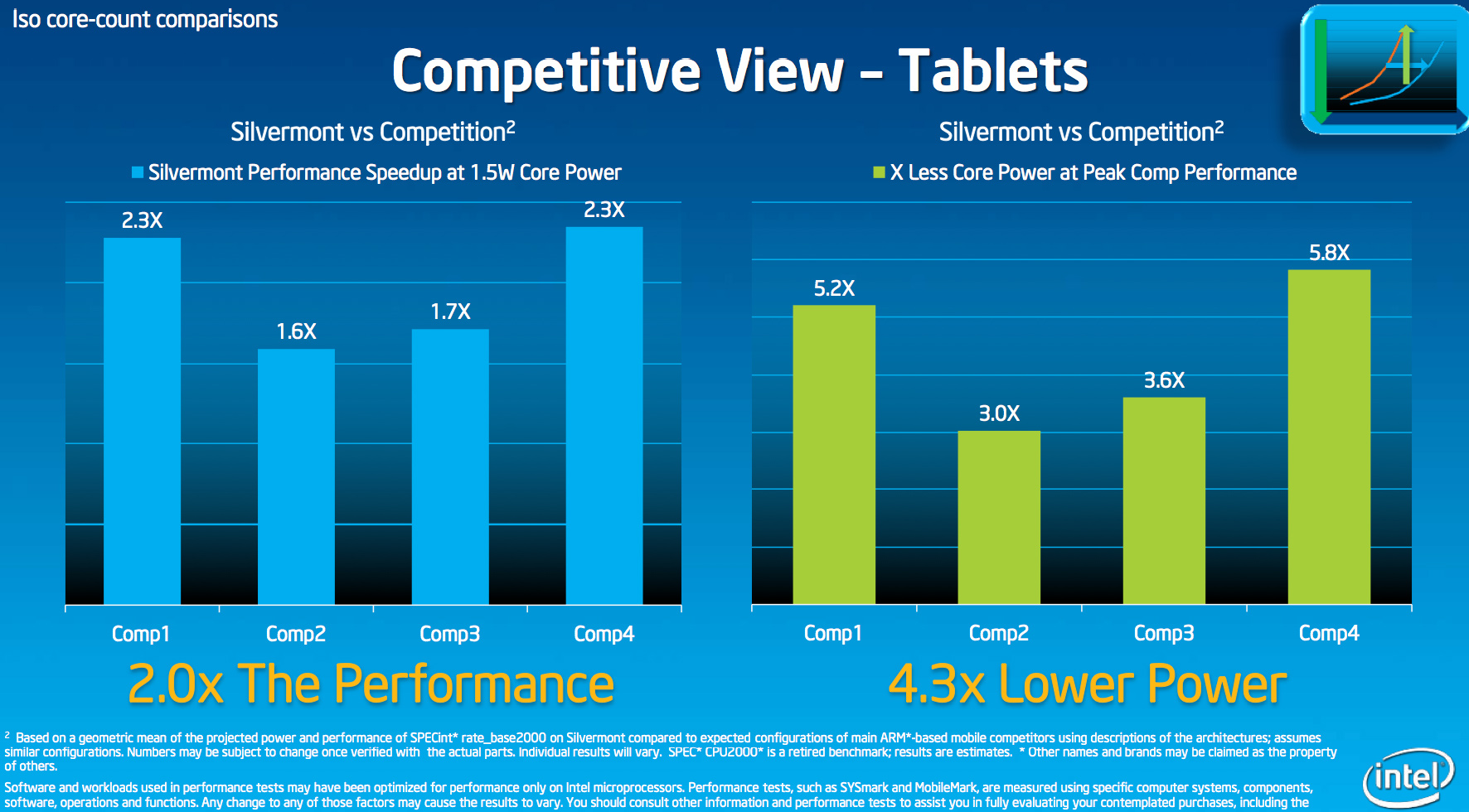 Intel’s performance comparison should of course be considered with a pinch of salt. These are internal benchmarks and in some cases simulations with not named competitors, but according to Anandtech the numbers are pretty accurate and match the data leaking from Silvermont partners.

In comparison with PCs Anandtech estimates that a 2.4 GHz Silvermont processor should deliver the same level of performance as a 1.2 GHz Penryn processor. This is on par with what Apple delivered with its Core 2 Duo Macbook Air in 2010.

The graphics performance is not as well documented, but here Intel will build its own GPU architecture from the ground up and fit 4 execution units in the Baytrail version of Silvermont. You can compare this to 16 EU found in the Intel HD Graphics 4000 series and Ivy Bridge. Most likely this will in no way deliver market-leading GPU performance, but enough to stand up fairly well against Apple A6X and Qualcomm Snapdragon 800. Intel has not shared any specifics and this is all speculation right now.

Silvermont will launch the Baytrail platform in Q4 2013 and then focus on tablets with Microsoft’s Windows 8 operating system. The x86 based processor architecture is expected to find its way into smartphones in early 2014 with Merrifield. If Intel can deliver on its promises we are going to see a real exciting Spring on an otherwise ARM dominated market. 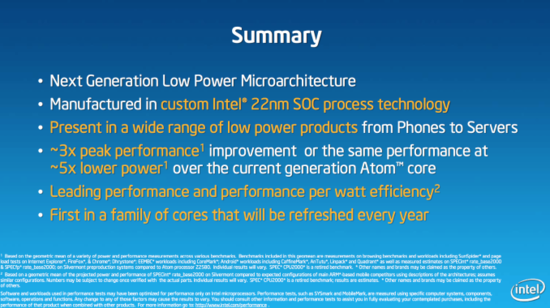