Intel Iris to compete with AMD Radeon and Nvidia Geforce

Intel has officially taken the next step with its graphics processors by naming its new GPU circuits ”Iris.” A name that plays on the origin of the OpenGL standard and clearly shows that Intel is ready to take on the GPU market for real.

Intel has been the supreme market leader in PC graphics for many years. It all started when the processor giant started integrated graphics into its chipsets and later into its processors. At the same time AMD and Nvidia have been the only companies that have been associated with games and bearable 3D graphics, something Intel aims to change. 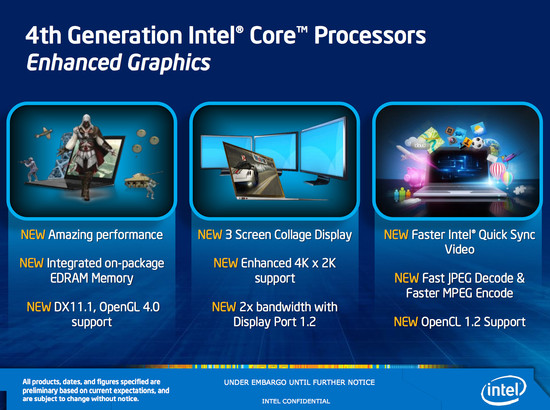 It’s been known for a long time the Haswell architecture will bring a big update on the graphics front and Intel has now confirmed that Haswell will be marketed more clearly for gamers.

Before the Opengl standard was opened up by Silicon Graphics and released for all platforms it was called Iris GL and now that Intel is starting to market its new generation graphics circuits it is with a historical and symbolic flirtation. Intel Iris graphics is the new name to remember for the more powerful graphics solutions found inside Intel’s processors, and the name plays both on the history of the OpenGL standard and the more obvious lens found in our eyes. 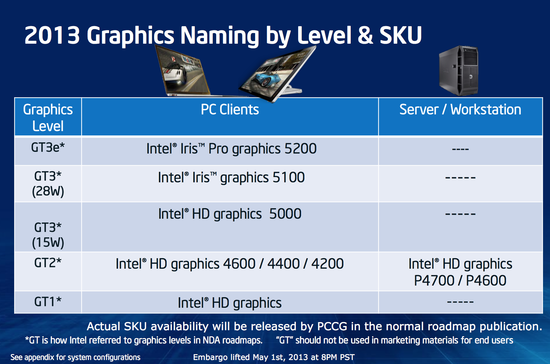 Intel realizes the importance of a powerful brand and decided to name only the most powerful graphics circuits Iris. When Haswell launches on June 4th there will still be Intel HD Graphics in several desktop processors and less powerful models for notebooks. Intel’s new brand Iris will be going up against AMD Radeon and Nvidia Geforce, and will be dedicated to only some versions of Haswell. It will launch two different versions of Iris. Intel’s GT3 GPU is dubbed Iris Graphics, while GT3e with128 MB integrated DRAM cache is called Iris Graphics Pro.

Intel Iris Graphics only in BGA

Intel will not be launching any LGA1150 processors for the desktop market with Iris-grade graphics. There will be more powerful desktop processors with Iris graphics, but only all-in-one R models using BGA packaging where the processor is soldered to the motherboard. An Intel Core i7-4770R processor with 65 W TDP will bring 3 times better graphics performance than Intel Core i7-3770K with 77 W TDP. 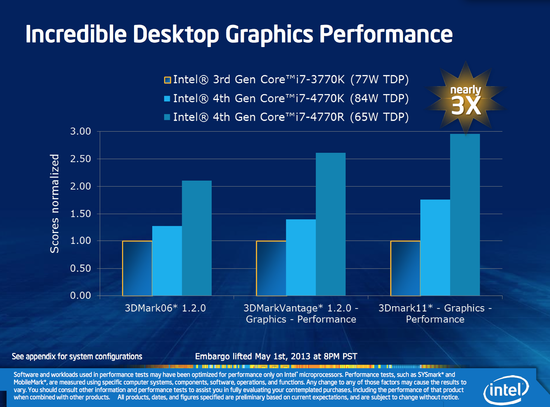 The mobile processor circuits promises up to double performance over current circuits in the 45-55 W envelope, while the Ultrabook processors will have to settle for a boost from 50 to 100 percent depending on the energy consumption. 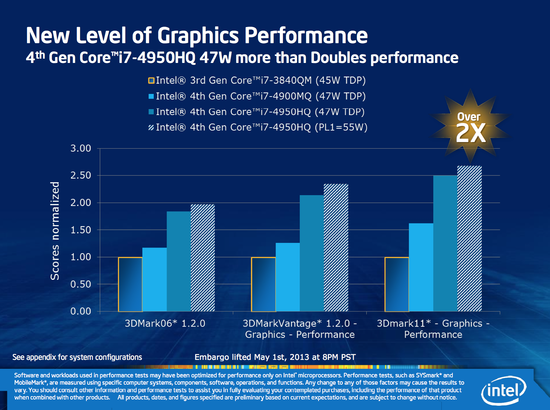 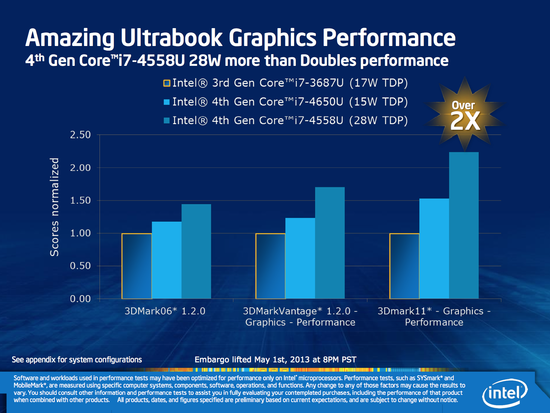 Intel’s goal with Iris is to reach levels of performance on par with Nvidia Geforce GT 650M and if it can do that the graphics market will get a lot more exciting for budget gamers.

Intel’s 3DMark benchmarks are not much help when trying to figure out how the new Iris Graphics will perform in games of different forms. As we’ve known for long this is very much down to drivers and specific game optimizations. It will be exciting to learn how Haswell will stand up to not just AMD’s integrated graphics circuits, but also discrete graphics cards in the budget segment. This segment is already under heavy pressure from AMD and Intel and may be going extinct in the near future.