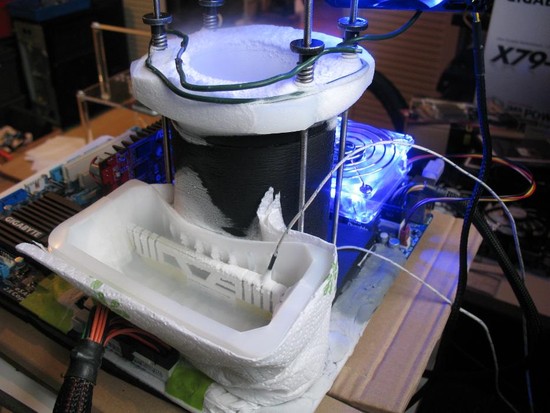 Despite unclear information on when Intel’s new processor series Ivy Bridge might arrive, but more and more leakss with specifications and benchmarks is out on the web. This time it is the coming Core i7-3770K that has been overclocked to 7.06 GHz.

With Ivy Bridge, Intel have several prarade routines, including Trigate transistors for lower energy consumption, and improved graphics processor that is expected to compete with AMD Llano. Exactly how this transistor affects performance has been left to leaks and rumors. One of the latest comes from BSN*, that says it has come across an overclocking result from an anonymous source.

The source says that the sample was an Intel Core i7-3770K, the flagship to replace i7 2700K. The processor has four cores with Hyper-threading, 4 x 256 KB L2 cache and 8 MB shared L3 cache. Just like the precursor it is clocked at 3.5GHz, but unlike it early overclocking results show really high overclocking potential under extreme cold, in this case 7.06 GHz, a boost of over 100 percent.

The source referenced a validated screenshot from CPU-Z, but doesn’t say exactly what hardware was used, but the settings were a base clock  (BCLK) at 112.11MHz with 63x multiplier and 1.889V. It was first said the processor was cooled by dry ice, but this was denied by overclocker AndreYang that is believed to be behind the result. it is most likely liquid nitrogen.

No benchmarks were included with the result, but there are few doubts that Ivy Bridge will offer an exquisite level of performance. If the result is genuine overclockers will have a lot more to look forward to when ivy Bridge arrives, and now we just have to wait and see when that is.