Intel Atom has never been associated with high or even sufficient performance, but this looks to change. The new Valley View that arrives next year will get up to four new cores and graphics performance in the same division as Ivy Bridge.

The new Balboa Pier platform with system processor Valley View will bring big news. The core that has been used since the introduction in 2008 will be replaced by the new Silvermont architecture. We don’t know much about Silvermont except that it will be an OoO architecture (Out-of-Order) like other x86 processors, including AMD Bobcat and Brazos. This means Intel is intending for a big lift in performance. Valley View will also introduce the same type of Turbo Boost technology that is used in Intel’s regular processors for desktops and notebooks. 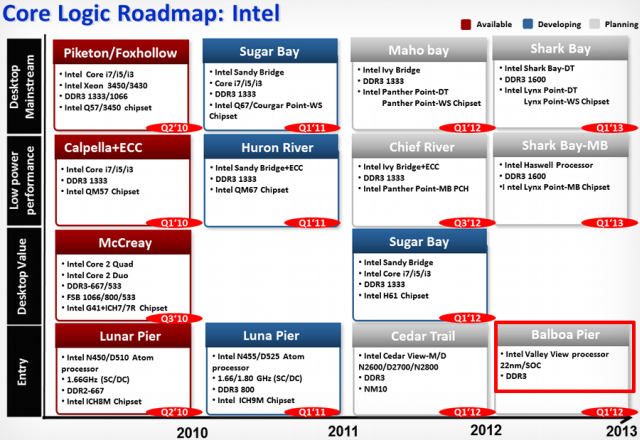 Valley View will sport up to four cores and besides what we hope is a great improvement for the processor, Atom will also get graphics worthy of its name. It will be based on Intel’s ownr graphics architecture Gen 7 (used in Ivy Bridge), which means it will support DirectX 11 and OpenCL 1.1. It will most likely not have the same amout of execution units as Ivy Bridge (16 at least). This should be a big improvement over today, with an n Imagination Technologies PowerVR SGX540 core on the same level as some smartphones.

This will be the first time Intel introduces a system processor for PCs, since Valley View will bring processor, graphics, northbridge and southbridge in one chip. The SoC will support up to 8 GB DDR3 memory and USB 3.0. Valley View will be manufactured using the  new 22 nanometer technology with FinFET transistors, and should launch Q1 2013. Just like the current Cedar Trail, which will also be available on Balboa Pier in fanless configurations – means  Atom will be in the 10W TDP and less envelope.