KFA2 focus on the NVIDIA side of the graphics market, and it has now launched the new MDT series. MDT is short for Multi Display Technology and through an extra circuit on the pCB it can run more than two monitors, which regular GeForce cards are limited to.

AMD made a lot of noise with the launch of the HD 5000 series where it introduced EyeFinity, which is a multi-monitor technology embedded into the GPU. This allowed its graphics cards to power up to six monitors, which caught NVIDIA off guard and made AMD an honest competitor to Matrox.

Since then we have seen various companies try to enhance NVIDIA GeForce with support for more monitors using additional circuits. Next in line is KFA2 that support up to five monitors with a GTX 560 Ti and up to four with the very cheap GeForce 210.

KFA2 GTX 560 TI MDT X5 supports up to five monitors, which makes it the first on the planet to do so. The resolution is rather limited through where you can have four monitors at 1440 x 900, or three at 1680 x 1050. This is possible through a ViewXpand VMM1400 circuit from IDT. 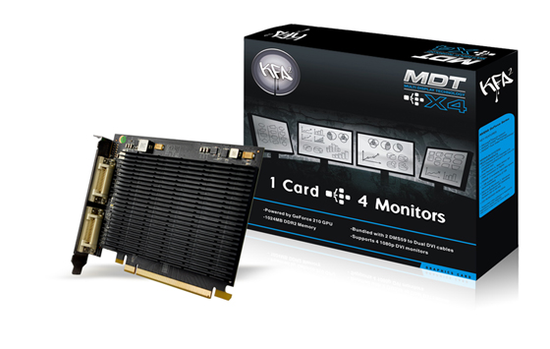 KFA2 GeForce 210 MDT X4 supports up to four monitor, but has no intention to play games. This cards supports four monitors at up to 1920 x 1080 on all four thanks to ViewXpand VMM1402. KFA2 says this card is optimal for workstations, video walls and heavy multi-tasking.

While these do look interesting it is hard to imagine why anyone would choose these when AMD Radeon offers the same thing, but higher resolutions on all monitors and software baked into the drivers. The GTX 560 Ti version simply looks too limited to be used for games. The GeForce 210 looks like the better purchase for anyone looking for a graphics card with support for four monitors.

No prices were given, but they are expected to arrive soon.