OCZ launches Vertex 4, based on Everest 2

Little over a year ago we found out OCZ had acquired circuit maker Indilinx. Six months later we got the first units based on the new Indilinx controller Everest. It is now time to launch Everest 2 and it does it with the Vertex 4 series.

We heard about Vertex 4 when we met OCZ at CES in Las Vegas, but then it had no name. We saw it again as Vertex 4 at Cebit and again at Dustin-Expo in Stockholm, and today is launch day.

OCZ Vertex 4 builds on the fresh Everest 2 controller that is the second SSD controler from Indilinx since it was acquired by OCZ. Despite a near cooperation with Sandforce, OCZ decided to name the new drive Vertex 4 with Everest 2 inside. For the first time in two years we will not find a Sandforce unit in the OCZ Vertex series. This should be an indication for good performance and if we look at the specification it certainly looks interesting. 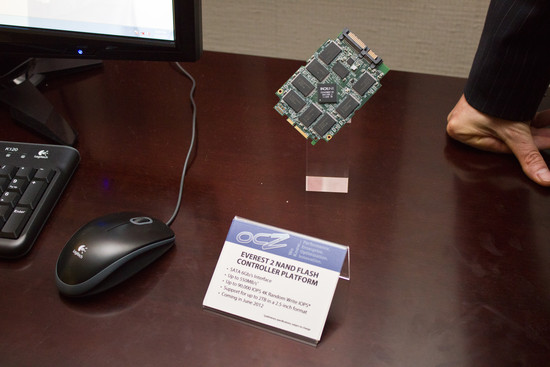 If you look at the specifications it looks like Everest 2 will perform on par with Sandforce SF2281 on average. It has slightly lower maximal read and write operations. The reandom read and write performance that is measured in IOPS is mighty impressive at up to 95,l000 IOPS at read and 85,000 IOPS at write.

Another interesting detail is that OCZ has squeezed in 1GB DDR3-800 meory in the Vertex 4 models, which is used as superfast cache at reads. OCZ says the large cache is not used to the fullest by the smaller units. This probably means future models at 128 and 256GB will sport 512MB cache. But right now 1GB is the guide line for all models. In the first tests of Vertex 4 OCZ is having some problems with the sequential read speed when handling small files and narrow que depths. These kind of operations are common in every day use and it hurts the overall performance.

The good news according to OCZ and Anandtech that tested the unit is that in a few weeks there will be a new firmware that will improve this substantially. At the same time Vertex 4 already has impressive write performance with both compressed and uncompressed ata, where not even Sandforce SF-2281 can keep up.

OCZ Technology has taken great leaps on the SSD market over the last few years and things are starting to come together with its own controller technology in Everest 2 and Vertex 4 we are very curious to see how the competition on the SSD market will evolve. SandForce has been dominant lately, but powerful solutions from Samsung and Marvell have shown potential and OCZ now has to prove itself with the latest Indilinx controller.

We hope to return with more information and benchmarks with Vertex 4 that should be on the market very soon with prices from 160€ for the 128GB model and 300€ for the 256GB model.