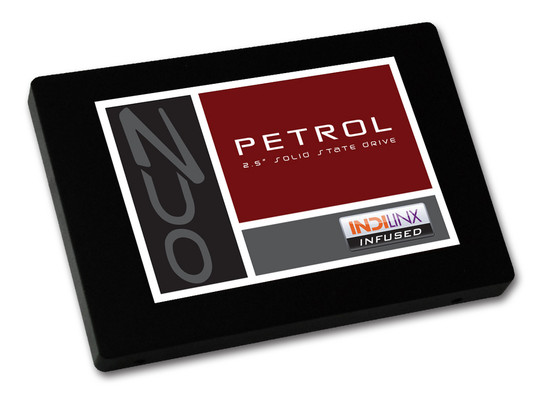 SSDs are more affordable than ever after the collapse of the harddrive industry earlier this fall, and OCZ is doi what it can to use this to its advantage. OCZ Petrol is a fresh SSD series with cheaper memory circuits that will reduce prices by 30%.

OCZ Petrol use the Indilinx Everest SSD controller with SATA 6.0 Gbps interface for good performance specifications. Unlike OCZ’s first Everest series Octane performance has dropped slightly and this is due to a careful choice of memory circuits. Instead of more expensive, synchronous NAND flash circuits from IMFT, OCZ has used cheaper asynchronous NAND flash circuits that results in lower performance, but at the same time lower prices. OCZ mentions up to 30% lower development costs and the first hits of the prices do look promising.

The Petrol series with its asynchronous memory circuits is very dependent on the number of NAND chips and even if the SSD maximal performance are very competitive the write performance drops considerably when the capacity is reduced. OCZ promises sequential read speeds up to 400 MB/s but write performance will according to the data sheet be up to 250 MB/s with the 512GB mode and up to 135 MB/s with the 128GB model.

OCZ Petrol will be available in 64GB, 128GB, 256GB and 512GB capacities and supports TRIM, Indilinx NDurance, Smart and AES-128. With 3 year warranty the units will be available in the upcoming weeks and we look forward to the actual store prices. With some luck we will be looking at a sub-$100 price.