PowerColor LCS Radeon HD 5870 V2 has a GDDR5 memory buffer of 1GB operating at 4800 MHz, like the AMD reference.

The graphics circuit on the other hand has been overclocked from the reference value 850 MHz up to pretty sweet 950 MHz for some extra crunching power from the 1600 Stream processors. Even though the card is overclocked the water block will keep GPU temperatures at ~50 degrees Celsius at full load.

The PowerColor LCS HD5870 V2 is equipped with an award-winning EK cooling solution once again. It’s equipped with a full water block mounted on the card, fully covering the memory and power regulator chip. The LCS5870 V2 is also designed with a copper base able to reduce temperatures under 50°C at load, offering outstanding thermal performance and enhancing the overclcoking potential in an ultra-stable environment.

The card has the usual features; DirectX 11, ATI Eyefinity and dual DVI, HDMI and DisplayPort outputs.

PowerColor tweaks the package with a download coupon for DiRT 2, though the price was not revealed. 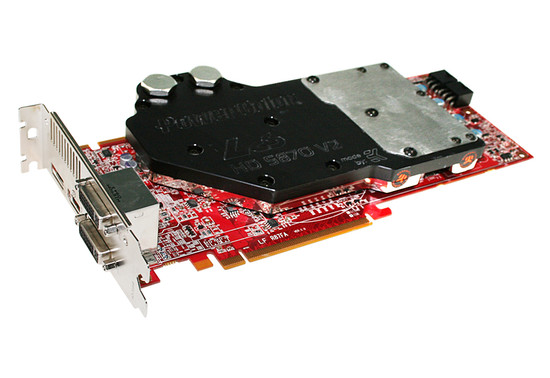