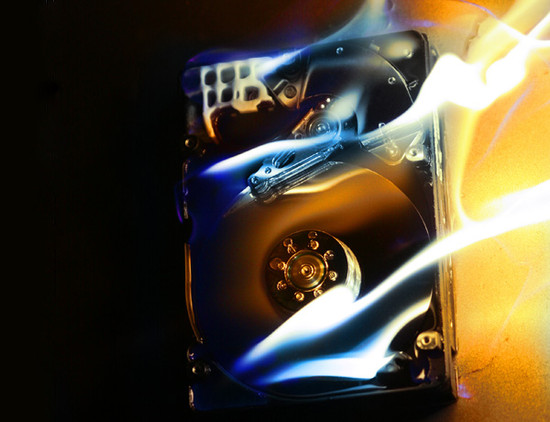 Mechanical harddrives are hardly known as speed freaks, but if we are to believe new discoveries this could change in the future. Physisists in the UK says that lasers and extreme temperatures can enable speeds up to 1,000 GB/s.

Our mechanical drives store data through magnetism where the surface consists of billions of small segments that can be magnetized to a certain polarity to represent either 1 or 0. When new data is stored the segments have to change polarity and this is done by applying a magnetic field, which is reliable, but perhaps not the most efficient .

At University of York in the UK a group lead by Thomas Ostler have discovered an extremely fast change in temperature can do the same job many times faster. Using an extremely short laser puls the temperature will increase to 800 degrees Celsius, which has the same effect as the applie magnetic field and change the polarity of the segment.

According to the paper the laser technology can more or less replace the magnetic field and be use to build harddrive storing terabytes of data on a fragment of a second, I.e. 1,000,000 MB/s. This is quite a lot more than the sequential speeds modern drives can achieve, at 150 MB/s. The technology for warming the platter with a laser puls will also be more energy efficient than current magnet technology.

As usual there are no real indications for when such technology would become available in retail products, or if it will even make it so far. With the slow pace of the harddrive industry we would sure like to see some improvement moving in this direction.