Japanese researchers at AIST have made a breakthrough in NAND flash technology with chips running at only 1V operating voltage. This means less power consumed, but also the possibility of higher write speeds. This is possible thanks to a memory technology called FeRAM (Ferroelectric RAM). The basic idea is to replace conventional NAND flash, commonly used in solid state drives, with FeRAM, or Fe-NAND.

The technology has a crystal structure with ferroelectric field effect transistors where atoms stacks differently depending on the magnetic field they are exposed to.

These changes are permanent and the memory doesn’t need a constant charge, which DRAM does. This makes it suitable for use in SSDs and other longterm storage products. The only time the memory needs current is when it actually reads and writes data. This could lead to very low power drives. 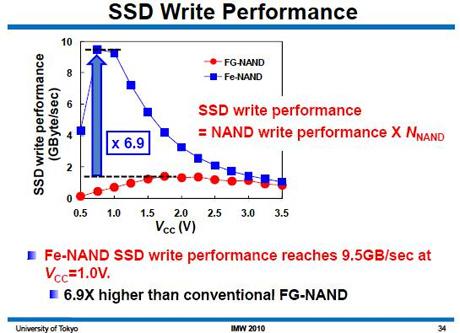 The voltage required for powering these kind of memories is also lower than we’re used to seeing. If you combine hundreds of these memory circuits and run them in parallel you could in theory make SSD that writes at speeds up to 10GB/s, which is theoretically possible according to the researchers. Another advantage is that you can ”reprogram” a memory cell a lot more times than you can with regular NAND-flash cells. Let’s just hope that someone develops a memory controller fast enough to meet the demands when they are ready for market.