Intel launched the SSD 520 series back in early February, which was based on the popular and now common SandForce SF-2281, although with a custom firmware. Taiwanese manufacturers now reveal that Intel has several new SSD series coming in 2012.

Intel latest 520 series is code-named Cherryville and use 25 nanometer MLC-NAND, which is built by the joint venture IMFT. The SSD performed well in our tests and Intel promised that its 520 series with SandForce will be more reliable than competing drives. This is thanks to the custom firmware it developed together with SandForce, now owned by LSI. There are plans for a sucessor this year already, says DigiTimes.

In Q3 a new 500 series based on King Crest will launch, which will most likely become the 530 series. The new series will use the new 20 nanometer MLC-NAND flash, which should result in even lower prices. Except from Maple Crest that we reported on earlier, Intel is planning two new 300 series called Jay Crest and Oak Crest for Q4. Details are scarse and also here they will use the 20 nanometer MLC-NAND flash.

Besides the new SSD series for retail, Intel will also release a new 700 series for businesses. It will also use 20 nanometer MLC-NAND and Taylorsville will come in capacities of 100 GB, 200 GB, 400 GB and 800 GB. It should also use the PCI Express interface, and not SATA. 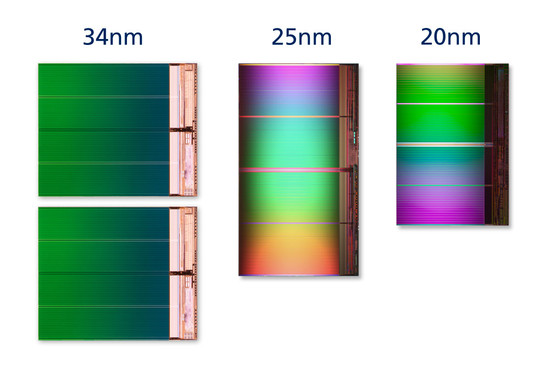 The new 20 nanometer chips will require new controllers and we can only speculate in the alternatives. Although if we were to venture a guess Marvell’s new controller looks like a suitable choice, but also expect SandForce/LSI to release a new controller in Q2. Considering the new cooperation it doesn’t seem that unlikely that Intel will be one of the first with a new SSD and controller from the LSI/SandForces SF-3 series.