Intel’s new Haswell graphics circuits with Iris graphics leading them will roll out in June for notebooks and judging from Intel’s slides it will mean the end of several of the competition’s mobile graphics circuits. Entry level circuits like Geforce GT640 and Radeon HD 6670 are certainly not safe.

That Intel has decided to introduce a new brand, separate for its most powerful integrated graphics solutions, really shows the ambitions of the chip maker. Leaked slides take this to a new level, where Intel not only shows the relative performance boost over previous Intel generations, but also compares to competing graphics circuits from other companies.

According to the roadmap shared by VR-Zone Intel says that its most powerful Iris solutions will be capable of competing with several of AMD’s and Nvidia’s dedicated mobile graphics circuits. Intel Iris Pro graphics 5200, also known as GT3e, is put on the same level as Nvidia’s Geforce GT640M, an entry level graphics circuit used by many system builders as an alternative to the HD Graphics 4000 graphics of Ivy Bridge. 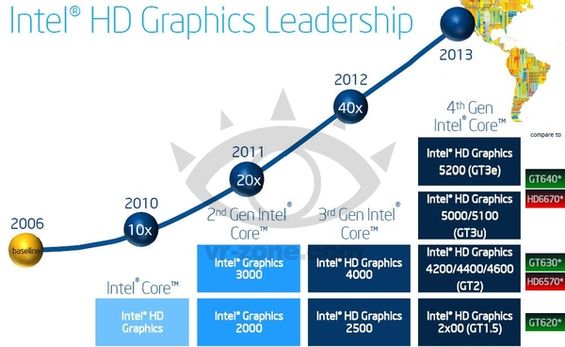 With Haswell Intel is feeling ready to take on GT640M and similar graphics circuits, which would mean that system builders can not completely scrap the use of discrete GPUs in the more affordable models. Besides most PC makers found in most stores, also Apple is one of the companies using Geforce GT 640M and the somewhat faster Geforce GT 650M in several of its computers.

If Intel can keep a level of performance similar to AMD’s and Nvidia’s dedicated entry level circuits it would open up new markets for the chip maker. Even if the more powerful Iris circuits means a higher manufacturing cost, especially the L4 cache of Iris Pro, it will be a more efficient and cheaper solution for system builders that has previously purchased separate processor and GPU.

Intel still has a lot to prove. Previous benchmarks have often presented large differences between HD Graphics 4000 graphics and Nvidia’s entry level solutions. If we compare performance in Borderlands between Geforce GT 635M GPU and Intel HD Graphics 4000 we can see nearly double the performance, which is what Intel promises in this segment with the new chips. It would not be enough to close the gap up to Nvidia’s entry level chips. 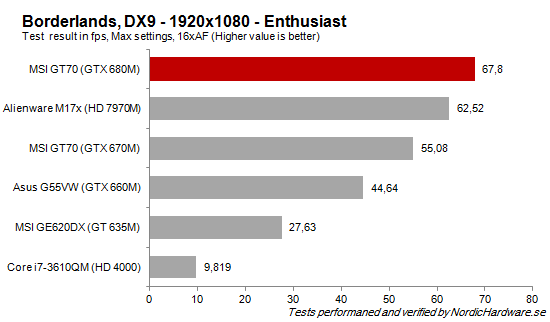 Intel Iris Graphics will likely bring high performance potential and could bring a big change to the graphics market. AMD and Nvidia will need to raise the bar of its discrete mobile GPU models and Intel will raise its revenue by shipping graphics performance that is sufficient for more powerful machines.

At the same time it will require work with drivers and continued cooperation with game developers to maximize the potential from Intel’s new GPU architecture. We believe that e.g. Nvidia Geforce GT 640M will be able to stand its ground fairly well against Intel Iris Pro 5200 in most tests and most likely be the faster of the two in most games. But just the fact that Intel is mentioned in the same sentence as otherwise relatively powerful chips from AMD and Nvidia is a development we could not have imagined a few years back.

Intel’s most powerful graphics circuit Iris Pro graphics 5200 will only be found in the most powerful mobile processors, where the slides mention the model Intel Core i7-4950HQ. The circuit will also be available in three different desktop processors in the Intel R series. Intel Core i7-4770R, Core i5-4670R and Core i5-4570R will all be rated 65 W TDP and only be sold with BGA packaging, meaning they are soldered to the board.

In the near future we will hopefully be able to buy real gaming computers built from just integrated graphics circuits. There is of course still a market for dedicated GPU circuits and will be available for a long time, but Intel is taking big steps forward with each processor generation.